The adventurous market for collector coins regularly comes up with new exciting innovations, which are implemented much faster and regardless of their advantages and disadvantages for circulation money. Colours, different shapes, high reliefs, inlays – it’s amazing how multifaceted today’s market is. In this article, we present a technique that even the US Mint, which is considered very conservative in such matters, has taken up after only a few years: domed coins.

Without altering the round shape per se, these coins aren’t flat as usual but domed – the centre of one side is deepened and the centre of the other side is elevated accourdingly. This means: one side is concave and the other one convex. Friends of ancient numismatics will immediately think of Celtic rainbow cups – and yes, the comparison fits! In the field of modern coinage, however, this technique is still very young, the first domed issues were created in 2009. Today, one mint is primarily associated with this technique because it has virtually become the institution’s trademark: the Royal Australian Mint. However, the first coins weren’t minted in Australia but by the French Monnaie de Paris. Several versions of these first coins were issued in gold and silver on the occasion of the International Year of Astronomy. The concave side is adorned with a rudimentary starry sky, some of the gold versions also feature blue gold, as it is used in the jewellery industry.

After its start in France the technique was then picked up by the Royal Australian Mint, which played a keyrole in turning this innovation into a worldwide success within the next years. We talked about how this came about with long-time industry expert Dr Prabir De, the former Technical Director of the Royal Australian Mint and Chairman of the Technical Committee of the Mint Directors Conference.

He recalls first seeing the French domed coin at the 2010 Mint Directors Conference in Canberra. “I was very impressed by the French coin, it was beautiful and saw the potential of this technique. So, I promoted the creation of our own domed Australian coin.” 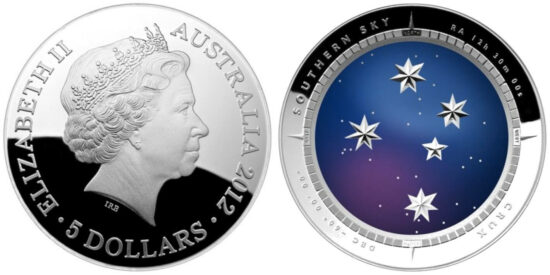 The result was the silver 5 dollar coin Southern Cross of 2012. It depicts the constellation of stars in the night sky, which is part of the Australian identity and the Australian flag. With the use of colour application for the night sky on the inner concave side, it was also the first domed colour coin. The coin was an immediate success and collectors were soon willing to pay enormous prices on the secondary market – helping this technique to achieve a breakthrough. Due to the huge success, the Australians continued and issued further curved coins with constellations of the southern and northern hemisphere in the following years.

The side view shows the curvature of the coin. Image: Royal Australian Mint.

How to Curve a Coin

Before we look at other products of this kind, we should talk about the technical aspects of such coins. How are these coins made? The specially prepared blanks get curved during the coining process by using a convex and a concave die. This requires oil-hydraulic presses that slowly and precisely apply a lot of pressure to the blanks. The designs for the dies are created on the computer in order to correctly calculate the distortion of the curved motif.

As can be expected, creating a domed coin makes several aspects of the manufacturing process more difficult: The dies need to be polished much longer and die life is much lower than those of conventional dies. Minting very large coins is a highly complex process, that’s why most domed coins that are available today are made of only one ounce of gold or silver. In addition, it seems impossible for now to produce domed coins made of platinum or palladium, as these metals are not ductile enough. Colour application also becomes more difficult due to the curvature. It is very tricky to apply colour close to the edge. At first, it seemed impossible for the experts at the Royal Australian Mint to colour the outwardly curved (convex) side.

Dr De recalls: “It was 2016 when we asked our technical people to produce a domed coin with colour in the convex side. It was a challenge. After a long process of trials and errors we finally made it.“ 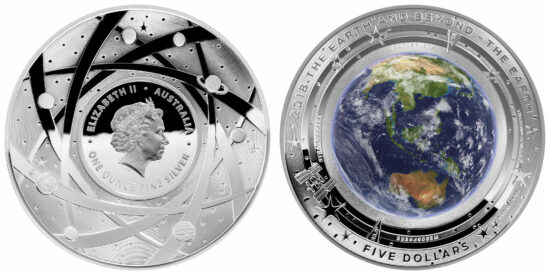 The result was the advanced Earth and Beyond series, which started in 2018. These issues had a coloured convex side and the different issues featured Earth, Moon and Sun. The series concluded in 2021 with a silver and a gold coin depicting the Milky Way – this was the first domed gold coin with colour application. Other Australian coins, for example those issued for the anniversary of the moon landing and even the traditional coins featuring Chinese zodiac signs, are now domed too. The technique has become an integral part of the Mint’s product line.

Meanwhile, other mints and private coin producers started issuing their own domed coins. As early as in 2014, the first curved coin was minted in the United States, and more of them followed in the next years. This is unusual because the US Mint is known to be very sceptical when it comes to applying new-fangled techniques to their venerable dollar coins. After all, it took 28 years from the world’s first colour coin to the first US colour coin – but the first domed US coin was issued only 5 years after the first domed coin! The Baseball Hall of Fame coins make clever use of this technique: the ball is depicted on the elevated part of the coin on one side, and the other features the ball caught by a hand in a glove on the concave side of the blank.

The Royal Canadian Mint issued the first curved coin in 2016, using the technical innovation to recreated the dome of the impressive Parliament Library in Ottawa. The UK did something similar with their first domed coin, which was released in 2021 and features the Royal Albert Hall in London. 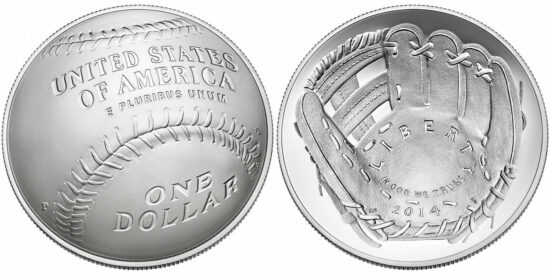 The 2014 US silver dollar commemorating an anniversary of the Baseball Hall of Fame features on the raised side the ball and on the other side the glove, which is supposed to catch the ball. According to the institution, the issue was inspired by the coins of France and Australia. Photo: US Mint.

A Lot of Awards

How successful this technique is can be demonstrated by the fact that domed coins have regularly been among the big winners of the Coin of the Year Awards in recent years. These awards are the Oscars of the numismatic world and presented in the context of the World Money Fair in Berlin. For example, Australia’s Southern Cross won Best Crown Coin in 2014; and Cassiopeia from the Northern Sky series was Best Silver Coin in 2018. In 2020, Earth won Best Crown Coin. American coins have also received many awards: the various baseball coins of 2016 became Best Gold Coin, Most Innovative Coin and Coin of the Year. And just this year, the coin commemorating the 50th anniversary of the moon landing became Best Contemporary Event Coin, Best Silver Coin and Coin of the Year.

The Technique and the Motifs Complement Each Other

What is the secret behind the success of these issues? I think there’s more to it than just the unusual shape: it’s about how the technique and the motif complement each other. Generally speaking, all mints that produced curved coins so far didn’t do so for the mere sake of minting domed issues. They used the technique for motifs that benefit from this additional dimension. There’s a good reason why most of these coins are dedicated to astronomical themes: constellations become dome-shaped night skies, planets become correctly curved hemispheres. A curved astronaut helmet reflects the scene of the moon landing, domes and other architectural elements become more realistic. The details in the relief can be perceived in a new way, the visual experience is different. And collectors appreciate that.

That’s why there is an increase in domed issues, especially in 2020/21 more curved coins were released than ever before. It is to be expected that even more mints will take up this new shape, which is becoming established and popular among collectors. The curvature is an interesting innovation that can enrich the motif in a meaningful way. For circulation coins, this technique is not yet relevant and will probably not become so ever given the production requirements – although technical innovations can certainly change something like that, just think of the first coloured circulation coins that are now circulating in Canada and Australia. By the way, German coins with this technique aren’t planned yet.