Swissmint, a Mint of Records

Since 1850, i.e. shortly after the foundation of the Swiss Confederation, the Federal mint has been located in Bern. Since 1998 it has been called Swissmint and continues the tradition of producing Swiss coins – circulation coins as well as new commemorative coins every year, which enjoy steady national and growing international popularity. Swiss numismatics is full of surprises, rarities and exciting stories. We have compiled a little overview of its records for you.

To appreciate this coin, you need a microscope: The latest record was set in 2020 and was only made possible thanks to maximum precision and technical finesse. The 1/4 francs coin honouring Albert Einstein has a diameter of only 2.96 millimetres and weights 0.063 grams (1/500 ounces) – that makes it both the world’s smallest and lightest gold coin. 999 specimens were produced.

Needless to say, the tiny coin was a tremendous success and sold out immediately. You should have seen the queues at the Swissmint booth during the WorldMoneyFair 2020 in Berlin! Collectors weren’t waiting to purchase the coin but to get their hands on a raffle ticket for a chance to win one of the last specimens.

One year earlier, Swissmint was extremely successful with Switzerland’s first coloured coin: collectors in Switzerland and all over the world fell in love with it. The Swiss national circus Knie is one of the institutions every Swiss has fond memories of; and the fact that the commemorative coin was one of the first state coins of the world dedicated to a circus attracted attention worldwide, especially among artists.

The First Living Swiss on a State Coin

One year later, Swissmint topped this success with an issue that broke for the first time with the Swiss tradition of not showing living persons on state commemorative coins. In 2020, Swissmint dedicated a silver and a gold issue to Roger Federer. And the pre-sale set an international record: within a few days, the Swissmint webshop received about 13 million clicks. 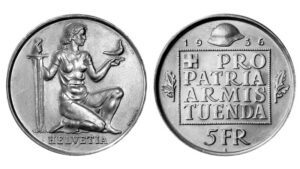 The First Commemorative Coin of the Swiss Confederation

If Swiss people look into their wallets today, they will see Helvetia, holding Switzerland’s coat of arms and a spear in her hands, standing on the obverse of ½, 1 and 2 franc coins. This motif created by Bovy has been on these coins since 1875, without interruption. The design of the reverse is even older and has been used since 1850! This makes standing Helvetia the world’s oldest coin design still in circulation. Since 1968 the coins have no longer been made of silver but of copper-nickel, however, their design remains unaltered.

The Rarest Coin of the Swiss Confederation

The silver 5 franc piece of 1886 is considered the rarest coin of Switzerland. And not because it is particularly beautiful, on the contrary. If you think that globalisation is a modern phenomenon, this coin will prove you wrong: the American Comstock Mine in Virginia City is the reason why the coin is such a rarity. Within a few years, the institution mined so much silver that prices collapsed. The consequence: the Latin Monetary Union forbade its members, including Switzerland, to mint silver coins. In 1885, Switzerland wanted to re-launch the production of 5 franc coins. A few coins were minted with the old die, however, it was in such poor condition that a new coin design was created immediately. As of 1888, seated Helvetia was replaced by a woman’s head crowned with alpine flowers.

Nobody knows how many specimens of the 1886 5 franc piece were produced. However, we do know that one piece is kept in the Swiss National Museum, one in the Bern Historical Museum and one in the Swissmint Collection. Only two specimens are in private possession. 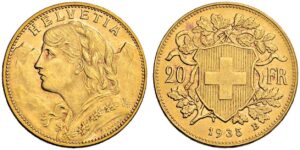 Switzerland’s most popular and best-known gold coin is certainly the vreneli. The 20 franc gold coin featuring a woman’s head was designed by Fritz Ulisse Landry and issued between 1897 and 1949. Just as record-breaking: a total of 61 million vreneli coins were minted – that is a share of about 97% of all Swiss gold coins! Even after 1949, vreneli coins (by the way, vreneli is a pet name for Verena, which is a very popular first name in Switzerland) remained an integral part of Swiss culture as christening gifts.

How could one write about the vreneli without mentioning the famous pattern for this coin. Landry’s first Helvetia coin designs were too revealing for the jury – they wanted the mother of the country rather than a young woman to be depicted. Thus, Helvetia was tamed and given a braid instead of open hair on the final patterns. However, even this design wasn’t satisfying: the Federal Council rejected the pattern because of a stray curl which gave Helvetia a “frivolous look”. The curl on Helvetia’s forehead disappeared, but the 12 specimens with the curl (Stirnlockenvreneli) are extremely sought after and are among the greatest treasures of Swiss numismatics.

The Rarest Gold Coin of the Swiss Confederation

As there are only 12 specimens of it, the vreneli with the curl would have been the rarest coin of the Swiss Confederation. However, it was a pattern, i.e. not an issue intended for the public. This might have been different for gold coins made of Gondo gold.

In the years between 1893 and 1897, Swissmint did not only mint gold coins from purchased mixed gold, which they normally used for their coins, but from the yield of a Swiss gold mine in Wallis operated by the Société Suisse Mines d’Or de Gondo. 20 franc pieces made of Gondo gold are among the rarest coins of Switzerland. 25 specimens were minted in 1893, 19 in 1895 and 29 in 1897. Although the 1897 20 franc piece of Goldo gold is the one with the highest mintage, it is by far the rarest of them, making it Switzerland’s rarest gold coin. It is quite easy for experts to tell the difference between these coins and the ordinary 1897 20 franc piece, of which more than 400,000 specimens were minted: they are of a lighter colour and have a small counterstamp with a cross in the Swiss cross on the reverse. 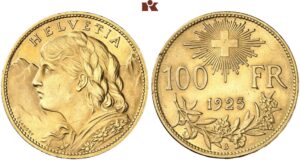 The Heaviest Coin of the Swiss Confederation

One last record set by a Vreneli: In 1925, large, representative vrenelis of 100 francs were minted for the first time. 5,000 coins were produced at that time, about 3,800 have survived to this day. With 32g, these pieces are the heaviest coins of the Swiss Confederation. And due to their diameter of 35 millimetres, they are also among the largest federal coins – only the silver 5 franc pieces from before 1931 were 2mm larger! 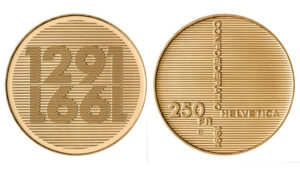 The Highest Denomination of Switzerland

The coin with the highest denomination ever minted by the Confederation is a 250 franc piece. It is a gold commemorative coin made in 1991. That year marked the 700th anniversary of the Swiss Confederation, i.e. the 700th anniversary of the Federal Charter of 1291, which is considered the founding document of Switzerland. However, when the coin was issued, it became apparent that there was a problem with these specimens. Brown spots had appeared on the surface of many coins, caused by contamination with silver particles. Thus, the mintage number was reduced and a second, almost identical series was released, this time without problems. You can differentiate the new from the old pieces as there is a small difference regarding the legend: “CONFOEDERATIO HELVETICA 1291 – 1991” became “CONFOEDERATIO HELVETICA 1291 ÷ 1991”.

The Swiss Coin with the Highest Mintage

Since the abolition of the 1 and 2 rappen pieces (2007 and 1977), the five rappen piece has been the smallest denomination in Switzerland. In 1980 it was decided to change the composition of the coin from copper-nickel to a cheaper copper-aluminum-nickel alloy. In the following years, enormous quantities of the small coin were minted. In 1983 alone there were a total of 92,768,390 – that is the highest mintage of a Swiss coin. Although the abolition of the 5 rappen piece has already been discussed, it is still going strong.

The Swissmint website always keeps you up to date.

There you can also order the print version of the customer magazine “HEADS OR TAILS” or download older issues.

You can browse through the coins of the Swiss Confederation in our database. Do you find any other records?

In 1906, the foundation stone was laid for today’s historic Swissmint building. Obviously CoinsWeekly reported on the 100th anniversary.

If you want to know exactly how coins are produced at Swissmint, we recommend this article.