The National Identity of Modern Ukraine on its Commemorative Coins

Due to tragic circumstances, all eyes are currently on Ukraine. Today, we’ll be discussing the national identity of the Ukrainian people. Using Ukraine’s commemorative coins, we’ll be looking at how the country sees itself, or rather, how it wants to be seen.

Modern Ukraine, with its current borders, came into being when the Ukrainian Soviet Socialist Republic broke away from the Soviet Union in 1991. The most important turning point in Ukraine’s recent history was in 2013/2014, when the mass protest known as ‘Euromaidan’ led to the fall of the pro-Russian government. After that, Russia annexed Crimea and the civil war in eastern Ukraine began.

The overwhelming majority of commemorative coins issued in Ukraine would fall under the heading ‘Ukrainian culture, architecture and national history’. By choosing these themes, the country highlights its own history and culture, which in turn helps to form a national identity.

Motifs we see especially often on Ukrainian commemorative coins are architectural monuments such as churches, monasteries, theatres, castles and palaces. The long-running series ‘Architectural monuments of Ukraine’ alone has two to four new additions every year. In 2021, for example, commemorative coins were issued in honour of the Kyiv Fortress, the Saints Peter and Paul Cathedral in Lviv and Olesko Castle. There are also series such as ‘Ancient cities of Ukraine’ and ‘Oblasts (= regions) of Ukraine’, whose coins depict landmarks of individual cities.

Ukraine’s commemorative coins also depict elements of its cultural heritage, such as local festivals, dances and folk art, including decorative painting and carpet weaving. In 2021, for example, a beautiful colour coin was issued to celebrate Reshetylivka carpet weaving.

Many of Ukraine’s commemorative coins refer to the country’s medieval history. For example, in 2019, a coin was issued to commemorate the start of the reign of Yaroslav the Wise 1,000 years ago. While he was Grand Prince of Kyiv, the Kievan Rus empire experienced its cultural heyday. On its obverse, the coin depicts St. Sophia’s Cathedral in Kyiv, as well as ‘Russkaya Pravda’, the legal code of Kievan Rus, which was written during Yaroslav’s reign. On the reverse, we see the prince on his throne, an image based on a miniature from a medieval chronicle. Commemorative coins like this one, or those focussing on the medieval Kingdom of Galicia and the early modern Cossack State, are intended to show that Ukrainian states did exist in the past, even if they had different names.

In recent years, Ukraine has issued an astonishing number of commemorative coins honouring anniversaries of universities, great scholars and medical researchers. Most nations in the world use these kinds of themes for their coins; it is a wonderful way for a country to present the accomplishments of its citizens, while also emphasising how much it cares about education.

Unlike in most other countries, military motifs have been very prominent on Ukraine’s commemorative coins in recent years. And it’s little wonder, given that eastern Ukraine has been engaged in civil war against the Russia-backed separatists since 2014.

Many of these commemorative coins feature general themes, such as individual troop types or certain military equipment, but there are also specific references to the civil war in Donbas. One coin issued in 2021 honours the famous Ukrainian opera singer Vasyl Slipak, who volunteered to fight in eastern Ukraine and was killed in 2016. He is symbolised on the reverse of the coin by a singing nightingale on the barrel of a gun.

In 2018, a coin was issued commemorating the defenders of Donezk Airport. For a year, this airport remained contested between the attacking separatists and the defending government forces, until it was finally captured by the pro-Russian troops in January 2016. The juxtaposition of the assault rifle and the sabre symbolises Ukraine’s defenders of both past and present.

The message these coins are meant to convey are quite clear: they are honouring the soldiers’ service to their country and, at the same time, expressing Ukraine’s military strength and willingness to defend itself.

Euromaidan, the pro-Western revolution of 2013/14, is regarded as a key turning point in Ukraine’s history. The revolution and its protagonists were therefore honoured on a series of commemorative coins as early as 2015, which demonstrates the significance of this radical change in the new state. One coin is dedicated to the ‘Heavenly Hundred’, the approx. 100 demonstrators who were killed during the revolution. Another coin depicts a clenched fist clutching a Ukrainian flag, with the European flag in the background – probably the most obvious symbol for the country’s reorientation towards the EU that could have been chosen.

The Crimean Peninsula was effectively annexed by Russia in 2014. However, it is still considered by Ukraine and nearly all countries across the world to be part of Ukrainian territory. Ukraine has made this very clear on its commemorative coins of recent years, which obviously never omit Crimea in their depictions of the country’s borders. In addition, the National Bank continues to issue commemorative coins dedicated to places in Crimea. For example, the 2019 ‘Oblasts of Ukraine’ series features a coin honouring the city of Sevastopol, located in Crimea. Another commemorative coin issued in 2018 is dedicated to the peninsula itself and its rich cultural heritage, dating back to antiquity.

This disregard for political reality sends a clear message: Ukraine will not give up Crimea, come what may. 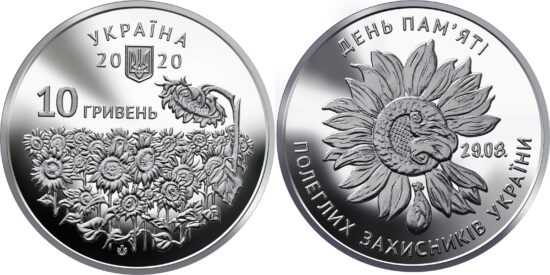 The sunflower is considered a symbol of Ukraine. Many readers will have heard about the video from the first few days of the war, in which a resolute older Ukrainian woman orders a Russian soldier to either leave the country or put sunflower seeds in his pockets so that, if he dies on Ukrainian soil, at least sunflowers will grow.

One coin from 2020 uses the sunflower symbol twice. It was issued to commemorate the Day of the Fallen Defenders. A field of sunflowers symbolises the Ukrainian people, with a broken flower to represent the soldiers who lost their lives in eastern Ukraine. On the reverse, the sunflower symbolises the entire country, while its petals represent the individual regions of Ukraine. The lowermost petal represents the Crimea; it has fallen away and its shape resembles that of a tear. Two of the petals on the right-hand (eastern) side of the sunflower are twisted – these symbolise the disputed territories of Donezk and Lugansk.

Ukraine as an Independent State

There are many other themes that Ukraine has highlighted on its commemorative coins in recent years: these include Olympic Games, native animals and plants, Chinese and European zodiac signs and the fate of Ukraine in the Second World War. However, the above-mentioned coins should suffice as an overview. As a final point, let’s take a look at the key theme of Ukraine as an independent state.

Many of Ukraine’s commemorative coins celebrate anniversaries that are directly related to this theme. The declaration of the Ukrainian People’s Republic in 1917, as well as the anniversaries of the country’s independence in 1991 and the constitution of 1996, are regularly honoured on coins, sometimes even with multiple issues. These coins are published in Ukraine under the series title ‘Rebirth of Ukrainian Statehood’. It is clear that these issues are intended to strengthen national identity and to send the message that Ukraine is an independent state. Particularly in light of current events, as Russia casually denies Ukraine this very sovereignty, it becomes clear why these coins are so important. 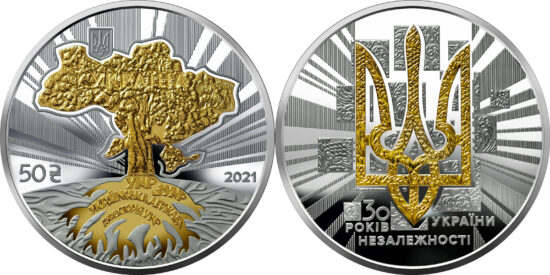 50 hryvnias, 2021: The 30th Anniversary of Ukraine’s Independence, from the series: Rebirth of Ukrainian Statehood. Photo: National Bank of Ukraine.

In 2021, Ukraine celebrated the 30th anniversary of its independence. One of the commemorative coins issued to mark this occasion depicts the country’s borders as the crown of a tree, growing out of the roots of its predecessor states. The bank wrote a text for this coin, which effectively summarises Ukraine’s sense of national identity as we see it presented on its commemorative coins:

‘At various times, the Ukrainian people fought for their right to have their own national state, language, and culture. Today, Ukraine is depicted as an independent state on world maps. Ukraine’s independence is based on the people’s historical memory, traditions and spiritual and cultural heritage.’

What more is there to add? In conclusion: on its commemorative coins, Ukraine presents itself as a diverse country, placing the focus on its own rich culture, history and scholarship. The military plays a significant role due to the civil war-like situation of recent years, and, in conjunction with this, also the Crimea, which has not been abandoned. And last but not least, the national identity of modern Ukraine, which has been independent for 30 years and more closely aligned with the West for eight years, is clearly at the forefront. Perhaps it is precisely this sense of national identity that Putin has underestimated. These certainly aren’t the last commemorative coins we’ll be seeing from a free Ukraine.

You can find the commemorative coins issued by Ukraine in recent years in our database.

You can view all of Ukraine’s commemorative coins on the National Bank of Ukraine website.