What Is the Difference Between a Coin, a Commemorative Coin and a Medal?

Structuring the world of modern coins isn’t that easy. Just some of the items laymen classify as coins are actually coins. In addition, there are special and hybrid forms and all kinds of unclear terms such as commemorative coin, collector coin, NCLT, bullion coin etc. Which types of coins exist? We present an overview. 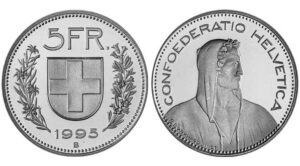 5 Swiss francs 1996. A typical circulation coin: you can see the face value, the name of the country, the coat of arms and the year. Image: Swissmint / Wikipedia

Let’s start with the typical form of a coin: circulation coins are coins issued by a state. They are legal tender with a face value and usually feature the name or the symbol of the issuing nation, for example the portrait of the monarch. They circulate as “genuine” coins in the respective issuing country or monetary union and can be used to pay at any time without a problem – provided that they aren’t old coins that lost their status as legal tender. 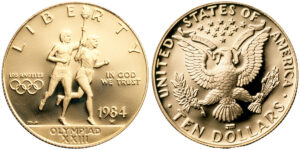 USA, 10 dollars 1984, commemorating the Olympics in Los Angeles. This gold commemorative coin was the first post-war gold coin of the USA. Photo: US Mint.

Commemorative coins are coins with a special motif. They are issued by countries on a single occasion, for example to celebrate anniversaries, treaties or personalities. Today, the target group of these pieces, whose price is often much higher than their face and material value, are mainly collectors. Therefore, these coins can hardly be found in circulation. In comparison to circulation coins, commemorative coins often bear denominations that don’t exist regarding circulation coins. Commemorative coins are in most cases made of precious metal and their production process is particularly sophisticated.

Commemorative coins are coins in the typical sense of the word. In theory, you can pay with these coins – and that’s what classifies them as coins. However, this virtually never happens. On the one hand, you will be confronted with mistrustful looks by the cashier if you try to pay with commemorative coins at the supermarket, and you will probably only succeed after the branch manager was consulted. On the other hand, these coins are usually much more worth than their face value. This is especially true for gold and silver commemorative coins. 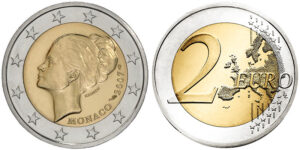 2 euro commemorative coins are a perfect example for circulation commemorative coins. They can be very valuable, just like this Monaco coin from 2007 commemorating the 25th anniversary of the death of Grace Kelly which is sold for more than 2,000 euros. Photo: ECB. 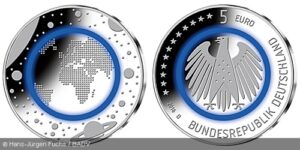 The term collector coin is a bit confusing and has only been used frequently for some years now. In principle, it has established itself as a synonym for commemorative coins. The European Central Bank is to blame for this. With the introduction of the euro in 2001, euro countries were no longer allowed to mint their own commemorative coins since all other countries of the euro area would have to accept them as legal tender. A compromise was reached: euro countries are allowed to mint coins for collectors, but they must NOT be called commemorative coins but collector coins and can only be used as legal tender in the issuing nation.

Popular examples for collector coins are Germany’s polymer coins like those of the “Climate zones of the Earth” series, Spain’s collector coins, which often feature latent images, and the silver niobium coins by the Austrian Mint. 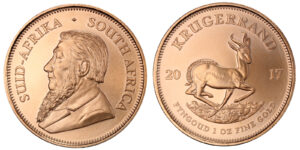 The Krugerrand from South Africa is the best-known bullion coin and, at the same time, somewhat unusual – it does not bear a face value. Photo: CoinInvest GmbH / via Wikimediacommos CC BY-SA 4.0

Bullion coins are another special case. Their price is neither based on a face value nor on their value to collectors – it is solely based on their material value. In principle, they are ingots suitable for small investors. They aren’t issued to pay with them or to collect them. Their purpose is to be used as an investment by those who believe that the price of the precious metal will increase. Most bullion coins are made of gold. By now, there is an increasing amount of mints who also issue versions in platinum, palladium and silver.

Often, but not always, such pieces have a face value – but this figure mustn’t be confused with the actual value of the coin, which is usually much higher. The world’s most popular bullion coin is the Krugerrand from South Africa. Other well-known examples include the Eagle and the Buffalo (US) as well as the Vienna Philharmonic (Austria). Sometimes, historical coins with high mintage figures are also traded as bullion coins, for example the Swiss vreneli and British sovereigns of some mintage years. 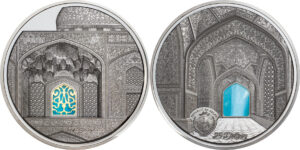 Tiffany Art. An example for “high-quality” NCLTs are the coins by CIT in Lichtenstein. They show what can be achieved by state-of-the-art production and finishing technologies. Photo: CIT.

NCLTs are issued on behalf of a country and have a face value. Therefore, they are legal tender and thus coins. However, as the “non circulating” in the name suggests, these issues don’t circulate in the issuing nation but are solely produced to be sold to foreign collectors. They are often produced by mints in other countries too, which means that the coins have never been in the issuing nation. This effort is made because the status as “genuine” coin has become extremely important for collectors since the 1970s.

NCLTs are issued, for example, on behalf of countries such as Niue, Cook Islands, Congo, Palau and Tuvalu, but also most products of the Royal Canadian Mint have this status.

Some criticise this genre and call the specimens “pseudo coins”. Their quality depends on the producer: you can find anything from the greatest kitsch to merchandise to artistically and technically impressive masterpieces. Often, innovative minting techniques are tested in this field and only appear later on commemorative coins. The first colour coins, for example, were NCLTs. 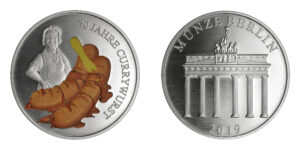 Looks like a coin but it’s something else: if you cannot see a face value, like on this coin by the Berlin Mint, it’s a medal.

Medals are works of art, not coins. Therefore, they do not have a face value, no issuing nation and can be produced and distributed by any person or institution. A well-known example is Germany’s “Currywurst coin” of 2019. Although it was minted by the Berlin Mint, looks like a German coin due to the Brandenburg Gate and was classified as a coin by many journalists, it’s a medal without face value and issuing nation.

A challenge coin of the 299th Brigade Support Battalion of the US Army. Image: Lubicz / CC BY-SA 4.0

Despite their name, challenge coins aren’t coins but a specific type of medals. They originated in the military, but found their way into civilian life. They are, for example, awarded to members of the police or the fire brigade as a sign of unity, but they do not have the same character as orders. After the service, they also serve as a reminder and link to the specific group. That’s why most of them feature a logo, coat of arms or other types of identification marks. The name derives from a tradition according to which one must always have one’s specimen at hand to show it when challenged to do so. You can read more about it in CoinsWeekly articles: here and here.

In the UK, a curious case recently demonstrated that it can be quite beneficial to know what kind of coin you are trying to pay with. Michael Alexander examined the case in detail.