A Matter of Perspective: Latent Images on Coins

There is hardly another modern minting technique that spread as quicky as latent images. There is a good reason for it: a latent image is not only a possibility to make a coin more interesting, it is also a feature that is considered to be forgery-proof. We explain what a latent image is, how it works and how it found its way onto coins.

Depending on whether you look at the square painting from the left or from the right, this image from the Museumsberg Flensburg depicts the Annunciation of Our Lady or Mary with the Infant Jesus. However, if you observe it standing right in front of it, you only see an odd mixture of both motifs.

The Merriam-Webster defines latent as “present and capable of emerging or developing but not now visible, obvious, active or symptomatic”. This means, latent images are images whose details cannot be seen right away or not all at the same time. Such images have been around since the Baroque period: they work because two or three depictions were painted on different sides of slats, which are arranged in such a way that the observer sees a different image depending on his angle of view. Some of you probably still remember trading cards from your childhood that show, for example, a dinosaur or superhero in motion when you move and turn the card. Those are latent images, too.

The same principle is used for coins: latent images with two motifs consist of tiny, two-sided structures, like the teeth of a saw. They show different motifs on both sides, which means that the image changes depending on how we move the coin in the light. This results in an effect that is similar to a hologram and is often described as such. Another common term for latent images is multiview mintings.

This technique has only been applied to coins since the 1990s because modern engraving and minting technologies were needed to create the microscopic details of latent images. The models are not made of plaster by hand anymore, instead they are designed on the computer, which also calculates the angles that are necessary to achieve the effect. Thanks to a laser, the model and its micro elements can then be engraved on the die. And modern minting presses make it even possible to apply these fine structures to mass-produced circulation coins.

This is of crucial importance. After all, this technique did not first appear on NCLT or commemorative coins – as it is common for new techniques – but on circulation coins. There is a clear reason for it: even though latent images are attractive elements that are usually incorporated skilfully into the design of a piece, their function as a security feature seems to be much more important. After all, the latent image effect, which can only be achieved by means of micro engraving created with a laser, is considered forgery-proof due to the modern technology needed for it. In addition, every mint with modern and common machinery is in a position to use the technique – there is no need for special equipment. Consequently, this technique has become widespread in the field of circulation coins: there is hardly another modern minting technique that spread as quicky around the globe.

From Spain Across the World

The technology was developed by the Spanish Mint. This Spanish 500 pesetas circulation coin is considered the world’s first coin with latent images and has been featuring it since 1993. Depending on the angle, the circular latent image on the reverse shows the logo of the mint (a crowned M) and the last two digits of the year. Since 1994, circulation commemorative coins of 2000 pesetas have also featured a latent image.

With the introduction of the Euro, latent images disappeared from cash in Spain – which was in some ways a step backwards in terms of security. However, things could have turned out differently: if you look at early drafts by Luc Luycx for the common obverse of euro coins, you can see small circles below the denomination on 1 and 2 euro pieces – it was discussed to feature latent images there! However, they ultimately decided against using them.

Unlike it was the case with euro coins, starting around the 2000 the technique was used for numerous circulation coins and some commemorative coins from all over the world. Latent images can now be found, for example, on coins from Russia, Japan, Poland, Singapore, Thailand, Taiwan, Malaysia, Canada, Syria, China, Zimbabwe, Tajikistan, Libya, South Africa, South Korea, Jersey, Guernsey and Georgia. Let it be said again: the fact that the technique established itself so quickly on circulation coins around the world is absolutely remarkable.

Spanish commemorative coins continued to be issued with this feature, and some other EU countries such as Greece, Belgium and the Netherlands also used it, to name but a few. Usually, the use of latent images is limited to a small circular field or area, however, there are also latent images covering the entire reverse or obverse of a piece, especially regarding commemorative coins. 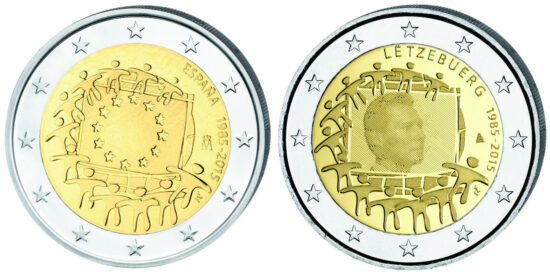 Thanks to a latent image, the Luxembourg version of the joint issue 30 Years of the EU Flag looked a little different than those of other European countries (here Spain).

By now, latent images have also made it onto euro circulation coins – thanks to Luxembourg. Unlike all other euro countries, the Luxembourg versions of the joint 2 euro issues features latent images. Why? Because in Luxembourg they adhere to the law! And the law states that the Grand Duke must be depicted on every coin. As the joint design of these coins does not leave any other room for his portrait, the Grand Duke was depicted by means of a latent image on the Luxembourg version of the joint issues (2007, 2009, 2012, 2015) – much to the delight of collectors.

Eventually, new ideas for latent images came again from the Spanish inventors of the technique. In 2012 they published the first coin with a quadruple latent image. On the 30 euro coin issued on the occasion of the 10th anniversary of the euro, the two-sided points were replaced by tiny pyramids whose four differently engraved sides make the quadruple latent image possible. This technique has been a regular feature on Spanish commemorative issues ever since. So far, the technique has not been applied to circulation coins. 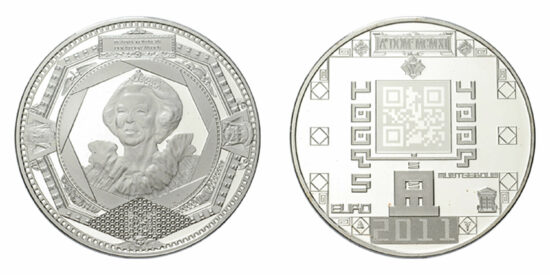 Netherlands, 5 euros 2011, commemorating the 100th anniversary of the building of the mint in Utrecht. Photo: Royal Dutch Mint.

A Unique Feature For 10 Years

The 5 euro coin issued by the Netherlands in 2011 on the occasion of the 100th anniversary of the building of the mint in Utrecht is a unique piece. The Spaniard Juanjo Sanchez succeeded in creating a six-sided latent image, which – depending on the angle of view – shows the letters U, K, N, M, D and R (for Utrecht Koninklijke Nederlandse Munt Dutch Royal). And as if that wasn’t enough innovation for one issue, the coin is also the first in the world to feature a readable QR-Code! As a result, the coin was honoured with the Coin of the Year Award 2013 for the most innovative coin and also won the main prize as Coin of the Year in that year. 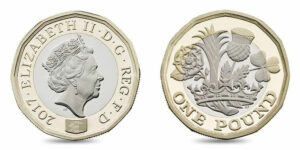 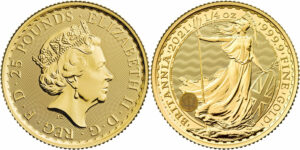 The Britannia bullion coins have been featuring a latent image since 2021 (trident / padlock).

The British have also discovered latent images as security features. 2 pound coins have been featuring a latent image since 1998. The new 1 pound coin, which has been in circulation since 2017 and is considered to be particularly forgery-proof, features a latent image below the Queen’s portrait on the obverse. The added security feature was needed urgently, as the Royal Mint estimated that about 3% of all old 1 pound coins in circulation were counterfeits. The security feature seems to have proved its worth, as from 2021 onwards the Britannia bullion coin will also be issued with a latent image in order to make the forgery-proof coin appeal to investors even more. This is in line with the Royal Canadian Mint, which also wants to make their bullion coins forgery-proof by means of micro inscriptions. It is quite likely that other institutions will also decide to feature latent images on their bullion coins in the years to come.

On YouTube you can get an impression of the only sixfold latent image.

You can find more coins with a latent image on Cosmos of Collectibles.