Courageous Girls in the Coin Wonderland 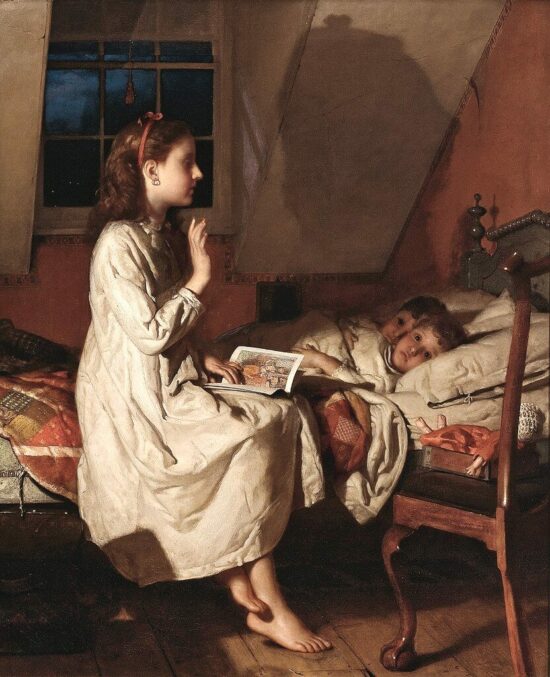 Seymour Joseph Guy: Story of Golden Locks, ca. 1870. The painting shows the children of the artist.

We all remember the time when parents or grandparents told us about extraordinary kids, fantastic animals and other curious creatures. And we also remember the eagerly awaited pleasure of finally being able to explore the wonderful stories of children’s books for ourselves – a journey that took us into worlds that were sometimes foreign, sometimes familiar and whose protagonists could be both positive and negative identifiers. In addition to their literary life, some of these characters made it onto the screens of movie theatres, TVs or computers – some of them are just like readers imagined them to be, and others are not.

Modern numismatics, or rather, the coinage industry of recent years also discovered some of the heroines and heroes from the children’s and young adult literature of the past two centuries. In this article, I want to find out in which situations which invented girls are depicted on coins. In doing so, I limit myself to courageous girls – i.e. those who bravely and curiously face up to uncertain situations with self-confidence and optimism and, in the end, successfully overcome them.

The background: It was not until the cultural epoch of the Enlightenment in the 17th century that people became aware of the fact that childhood is a separate chapter in the life of every human being; in the 18th century, a second phase called “adolescence” was added to this concept (Ariès 1975). With the spread of this new insight, corresponding educational institutions and writings emerged especially in the 19th century in the context of a more self-confident middle class.

As a result of the popularity of fairy tale collections during the Romantic era, contemporary fairy tales were created at the same time. To distinguish them from folk tales/traditional fairy tales, these new works were called modern fairy tales. Among the most popular fairy tale writers of that period are Ludwig Tieck (1773–1853), E.T.A. Hoffmann (1776–1822), Clemens Brentano (1778–1842), Alexander Sergejewitsch Puschkin (1799–1837), Wilhelm Hauff (1802–1827), Hans Christian Andersen (1805–1875) and Oscar Wilde (1854–1900). Folk tales are typical of the region and the period during which they were written down. Modern fairy tales, however, point out the social hierarchy of their age even more. They illustrate the economic, social and cultural poverty of large parts of the population (especially children) or emphasise the emerging negative consequences of the onset of industrialisation and the simultaneous release of the peasant, mainly serf population. Since the female protagonists of Hans-Christian Andersen’s modern fairy tales that are depicted on coins do not seem to be very encouraging for young female readers, they are not presented in this overview. Also missing is the young American Dorothy Gale from the tale The Wizard of Oz, written by L. Frank Baum and published in 1900, because I do not have images of the corresponding coins (Cook Islands 2017 and Tuvalu 2019). 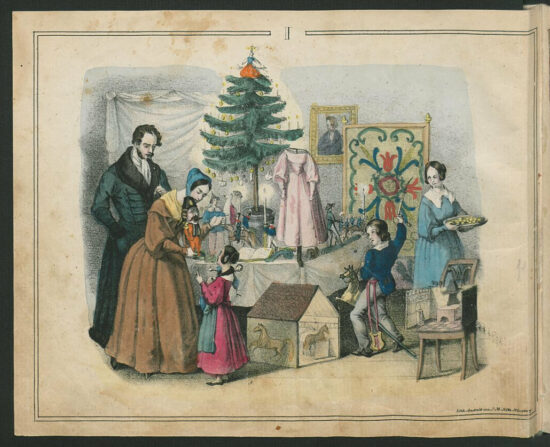 Illustration for E.T.A. Hoffmann’s The Nutcracker and the Mouse King by Peter Carl Geißler.

Things are different regarding Marie from the modern fairy tale The Nutcracker and the Mouse King (1816) by E.T.A. Hoffmann (1776–1822): Thanks to various stories, Marie discovers on Christmas Eve that her brother’s damaged nutcracker is the bewitched missing nephew of her godfather. She confidently follows the ugly and injured nutcracker into the puppet kingdom and assists him in the fight against the Mouse King. As a result of her bravery, she is able to release the spell, the nephew can be human again and Marie wins him as her partner. In Peter Tchaikovsky’s ballet, composed in 1892, the protagonist is called Clara, just like the daughter of Hoffmann’s friend J.E. Hitzig, who was the model for the heroine portrayed in the fairy tale. However – due to the limited formal language of classical narrative ballet – the female protagonist is deprived of much of her strength in terms of body language in the coin images referring to her. 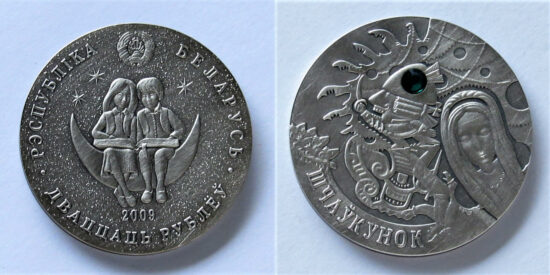 The transition from modern fairy tales to children’s books was seamless. Pinocchio by Carlo Collodi Lorenzini (1826–1890) and The Wonderful Adventures of Nils by Selma Lagerlöf (1858–1940; Nobel prize: 1909) are some fantastic serials with educational value. As a courageous girl, ALICE became world famous. Her adventures were immortalized in the two books Alice’s Adventures in Wonderland (1865) and Alice Through the Looking Glass (1871) by Lewis Carroll (1832–1898) with illustrations by John Tenniel, and are still considered prime examples of literary nonsense that captivates children and adults alike.

> Niue Island, 2 dollars, 2021. For versions for the 70th anniversary of Disney’s animated movie Alice in Wonderland.

The fact that the adventures of the “oldest” courageous girls in children’s and young adult literature presented here take place in fantasy worlds is hardly surprising. The social reality of adult women in the 19th century did not allow them to act the way they could in their imagination. “Based on qualities such as virtue, modesty and diligence, women are assigned their roles as housewives and mothers. Because they supposedly lack objectivity and judgment, women are denied the status of autonomous human beings. A guardian, for example their father, brother or husband, dictates their lives” (Warsitz n.d.) – at least regarding families of the aspiring bourgeoisie. The next heroine presented here numismatically, the orphan HEIDI from the novels by Johanna Spyri (1827–1901) published in 1879 and 1881, is at risk of being crushed by these social constraints. You can read about her adventures in Heidi: Her Years of Wandering and Learning and Heidi: How She Used What She Learned. Heidi gets support from nature – which is strongly idealised by the author – and from her grandfather, who lives a non-conformist life. The coin images show the hard and lonely life of a shepherd girl of that time – however, they do so from an extremely trivialized perspective.

The demands of the old feminist movement had focused on the areas of education, professional practice, owning one’s own money, the right to vote and a change in the moral basis of society. The shocking events of the First World War fundamentally shook the social order in Europe and resulted in most states at least in the implementation of women’s suffrage. Other regulations for gender equality could only be implemented gradually or in a very limited manner over the following years. And although surviving the Second World War without the work of women wouldn’t have been possible, traditional gender roles have persistent to some extent to this day.

The strong girls of post-war children’s and young adult literature often illustrate how special they are by means of a comparison with weak girls. However, honouring them with the statement “you are different from others” makes them outsiders and does not change the fundamental gender hierarchy (Haaf 2019). This is especially true for the next courageous girl presented here: nine-year-old PIPPI, whose adventures can be read in the books Pippi Longstocking (1945), Pippi Longstocking Goes Aboard (1946) and Pippi in the South Seas (1948). The Swedish 50 kronor coin commemorating the death of her creator Astrid Lindgren (1907–2002) depicts self-confident Pippi dancing alone through the world. 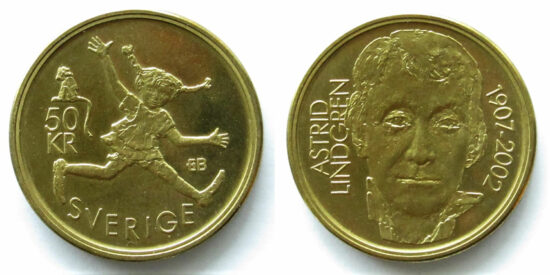 One of the new heroines of young adult literature is once again experiencing her adventures in a fantasy world. In the seven Hogwarts novels by Joanne K. Rowling (*1965), published between 1997 and 2011, HERMIONE GRANGER assumes the central female role alongside the young wizards Harry Potter and Ron Weasley. The novels follow the development of the young woman and her friends from age 11 to 18, through adolescent turmoil and fundamental life decisions. The name Hermione comes from ancient Greek and is the feminine form of Hermes, the messenger of the gods. Hermione’s depictions on coins are mostly based on scenes of the movie adaptations, and show the youthful actress at various ages and always in an attentive and determined pose. The latter is even true regarding the very reduced and trivialized form of the new chibi coin.

> Niue Island, 2 dollars, 2020. Number 2 of the Harry Potter series by the NZMint in the form of chibi coins.

The girls from two centuries of children’s and young adult literature presented here were unusual when the books were first published and, at the same time, met the prevailing taste. The works were translated into many languages and made their heroines world famous. Only a few girls managed to do so in literary and cinematic fiction as well as in reality. Therefore, the coins minted so far present an appropriate selection. The imagery of modern coinage – apart from coins issued in the context of Disney merchandise – adopts original illustrations and largely respects the intentions of the authors, of whom only two have so far been honoured by being depicted on a coin themselves. For a more detailed analysis, coins issued by foreign mints that were commissioned to do so (for example on behalf of Niue) – a trend that has increased in recent years – should be examined separately. After all, they do not reflect the gender image of the licensing states but rather that of the privately operating mints and the numismatic companies that commission them.

It’s striking to see that creators of strong girl characters obviously find it easier to have them act in fantasy worlds. And the names of the young heroines only appear in the work’s title regarding Heidi and Pippi. In the written version of their adventures, the characters presented here exhaust the limits of what girls could do in their respective historical time frame – this is less evident in today’s coin images. Even today, stories from girls’ everyday live represent a rather narrow spectrum of behaviour and rarely produce heroines. As long as there aren’t more stories that succeed in overturning the stereotypes of typical boys and girls and reach a wide audience with modern role models, coins issued to commemorate literary figures cannot feature anything else.