The Vreneli – A Swiss Icon

With its latest commemorative coin launched on 11 May 2022, Swissmint honours the last issue of the 10-franc vreneli minted 100 years ago. A prime opportunity to recall the history of this iconic Swiss gold coin. 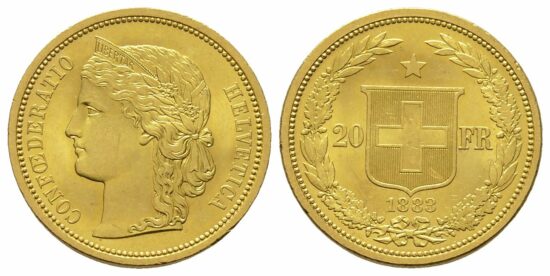 The first coins of the newly founded Swiss Confederation were issued in 1850. At first, no gold coins were minted. This changed in 1883, when the gold 20-franc piece was introduced. But the coins featuring the head of “Libertas” – the female allegory of freedom – were soon considered somewhat old-fashioned and the motif wasn’t specifically tailored to Switzerland. Therefore, the Federal Department of Finance organised a competition in 1895 to find a new design for 20-franc coins. The commission phrased it this way: “The new effigy should make Helvetia accessible to a broad Swiss public by relying on a Swiss national motif, an allegorical or historical-symbolic representation of her.” It turned out that it wasn’t easy to find such an allegory. None of the submitted drafts met the expectations of the commission, which is why no first prize was awarded, and the winner of the second prize was asked to revise his draft. And that’s what Fritz Ulysse Landry did: he created a new version of his model of the head of Helvetia, which had seemed too young, too individual and too dreamy to the commission. Although the second draft still wasn’t exactly what the commission had in mind, they created some patterns nonetheless. They were sent to the magistracy in charge of approving the coins – and were promptly rejected. The curl on Helvetia’s forehead gave “the wench a frivolous look”. And this was obviously inconsistent with the dignity of a personification of Switzerland.

So the curl was removed and the first coins were finally put into circulation in 1887. They caused a great sensation. Some people thought, Switzerland could not be compared to a young maiden but should instead resemble a beautiful woman and mother. Others were opposed to the mountains in the background since – as a modern industrial nation – Switzerland should finally emancipate itself from the prejudice of being a mountain and shepherd people. Still others would have liked to see William Tell on the coin. 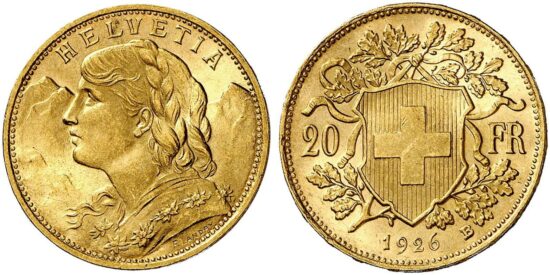 What was highly controversial at the time has become Switzerland’s most popular gold coin: the gold vreneli. For example, it is still given as a present on traditional occasions like births or as competition prizes. The term vreneli is actually a nickname for the coin that became popular after the Second World War. It’s a diminutive of the popular Swiss name Verena – which is also used as a synonym for girl – and of course refers to the young woman on the coin’s obverse.

Until 1949, and thus for half a century, vrenelis were minted in large numbers. A total of 58.6 million specimens were issued during this period. Due to high mintage numbers, their price usually equals their gold price today, and they are popular bullion coins in Switzerland and abroad.

Of course, there are still great rarities and actual treasures to be found among vreneli specimens. For example the above-mentioned pattern with the frivolous curl. These specimens are among the great rarities of Swiss numismatics, fetching up to CHF 150,000 (approx. 143,000 euros) at auction. Or the specimens minted in 1897 from the gold mined at Gondo (Canton of Valais). The pieces can be recognized due to their lighter gold tone and a punch on the reverse, they realised prices of up to CHF 100,000 (approx. 95,000 euros) at auction sales. Only 29 coins of this type were made from Gondo gold.

So much for the vreneli. Actually, the new commemorative coin by Swissmint isn’t about the classic vreneli of 20 francs but the 10-franc coin, which is also called “half vreneli”. According to Swissmint, this coin is the “little sister of the legendary 20-franc gold vreneli”. The story of this little sister did not begin until 1910 – and it isn’t a very long story either. For the first time in Swiss history, gold coins worth 10 francs were to be minted at the time. The authorities would have liked to adopt the complete vreneli design for these coins. But it turned out that it wasn’t possible to create the same motif on blanks that had a smaller diameter and weren’t as thick as the original vreneli coins. The relief would have been too high, there simply wasn’t enough metal at the centre of the coin. So they needed a new reverse motif whose relief was quite low in the middle. Fritz Landry, who had already created the 20-franc piece 15 years earlier, was again commissioned with the design.

Landry’s new reverse draft depicted a Swiss cross in an aureole at the top, below the year surrounded by branches of the alpine rose, below the mint mark B for Bern. The denomination 10 and FR can be found in the centre to the left and right. The draft was pleasing due to the tidy arrangement of elements. Helvetia’s head on the obverse remained almost unchanged, only the signature F. Landry was moved from the lower right to the lower left. 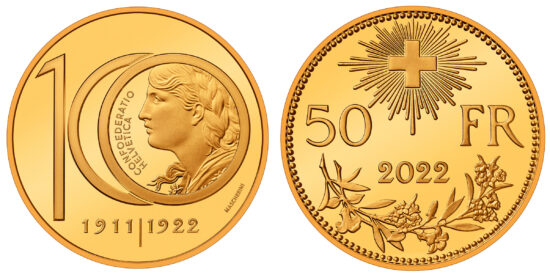 Incidentally, the successful reverse was used again a few years later, when a one-off 100-franc vreneli issue was minted in 1925 with a mintage number of 5,000 specimens. To this day, this is the largest and heaviest coin of the Swiss Confederation. Now, in 2022, the reverse design of the commemorative coin was again used for the “100 Year Anniversary of the Last Minting of the 10-Franc Vreneli” commemorative coin. Instead of 10 francs, the commemorative coin has a face value of 50 francs and the year has obviously been updated. Otherwise, the design of the reverse remained unchanged. The obverse created by Remo Mascherini shows the anniversary number 100, with a detail of Landry’s Helvetia head in the last zero. Below, the numbers 1911 and 1922 recall the production period of the 10-franc coin.

You can find out more about the new coin in our database Cosmos of Collectibles.

There you can also find all coins of the Confederation, including 10-franc and 20-franc vrenelis.

This article tells you more about an important aspect of Swiss coin production in the 19th and early 20th century: being a member of the Latin Monetary Union.