Doctors have always been a source of hope for people in health emergencies. Over the course of the pandemic, they and other health care professionals have become much more prominent. While the latest numismatic issues feature nameless medical professionals or allegorical depictions and are clearly inspired by the current pandemic, earlier coins commemorate (famous) women in medical professions and refer to other historical or socio-political topics, which sometimes overshadow the medical field itself. 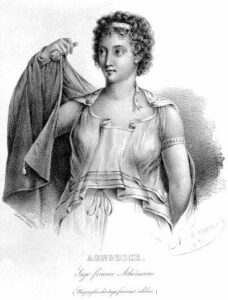 An early modern depiction of Agnodice.

History of Women in Medicine

We know little about the woman that is believed to be the first female physician of antiquity. According to an account of the historian Hyginus Mythographus, Agnodice lived in Athens around 300 BC and studied medicine and obstetrics – dressed as a man – under the Alexandrian physician Herophilos. When the disguise of the practicing physician was revealed and she faced death penalty for her improper behaviour, influential Athenian women stood up for their gynaecologist. This ultimately resulted in a legislative amendment, according to which freeborn women were henceforth allowed to study and to practice obstetrics and medicine (wissen.de, 2021). In terms of medical history, they followed the tradition of the Hellenistic training and research centre in Alexandria, where numerous discoveries were made in that period on the basis of which several theories about bodily functions, health and medicine evolved. To this date, there is no coin commemorating her. 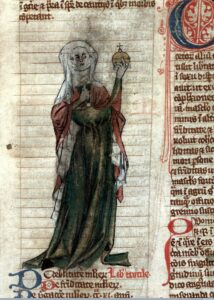 The physician Trota, one of Salerno’s wives from a medieval manuscript of around 1200.

After the division of the Roman Empire in 395, centres of medical science emerged primarily in Constantinople, Cairo, Baghdad and Damascus. In those places, important writings from the Arabic, Greek and Latin linguistic and scientific spheres were collected. Gynaecology and obstetrics mostly remained in the hands of women themselves – in the Orient, among others, selected harem women performed these tasks, in medieval Europe it was mainly the monasteries that were responsible for it, along with developing herbalism. The first medical school of Europe was founded in the 10/11th century in Salerno in southern Italy. Some women, mulieres salernitanae, also worked and taught there (Kerckhoff 2010, S.12).

At the beginning of the modern era and in the context of a rise of the academic sciences, women were excluded from standard education and risked their lives as midwifes and healers in times of witch-hunts (the last witch of Europe was executed in 1782 in the Protestant Swiss canton of Glarus – in Germany, barbaric punishment took place in Kempten in 1775). It was not until the second half of the 19th century, in the course of a first wave of women’s movements, that women ventured again to fight for education, professional training, their own money, the right to vote and a changed moral basis of society. The first girls’ high school was finally opened in 1893 in Karlsruhe to enable young women to graduate with Abitur, which is the prerequisite for being admitted to universities in Germany. The official admission of women to study at German universities took place in the individual states between 1900 (Grand Duchy of Baden with the universities of Heidelberg and Freiburg) and 1909 (Grand Duchy of Mecklenburg with the university of Rostock). Prior to this, the Bundesrat (Upper House of Parliament) had decided in 1899 to officially admit women to the study of medicine, dentistry and pharmacy.

Coins in Honour of Female Doctors

“At universities that were open to reform efforts in the 18th century, some women, especially the wives and daughters of professors, were able to have an intellectual exchange with students and professors at informal meetings. … [Thus] Dorothea Christiane Erxleben, who had received permission from the Prussian King Frederick II to take the medical exam, used the medical doctorate she had obtained from the University of Halle on 6 May 1754 to work as a doctor” (German wikipedia: Frauenstudium im deutschen Sprachraum, as consulted in March 2021).

The biographies of the few other female physicians honoured with numismatic issues demonstrate how important it is to fight for a self-determined and socially sustainable life of women. In Germany, in the winter semester of 2019/20, 62.5% of students of human medicine were women, the proportion of women among practising physicians and psychotherapists was 47% (67.1% regarding gynaecologists, 67.1% regarding paediatricians and 53.2% regarding dermatologists). However, only 10% of the head doctors in German hospitals are women. The public hardly recognises this, and numismatic issues certainly do not.

We can find these female doctors on modern coinage (sorted according to their year of birth):

Research positions in the medical field requiring a university degree in medicine, pharmacy or biochemistry will be held mainly by women in the future, as two thirds of the students of these subjects are currently women. And they have a famous historical predecessor, who already did medical research 900 years ago behind the walls of a monastery, before women were almost entirely driven out of this field. At least for this famous researcher there is a numismatic issue, although it rather depicts Hildegard von Bingen as a mystic than a medical researcher.

Over the course of the past 100 years, an increasing amount of women has made it into modern research labs – even though commemorative coins for one of the twelve female Nobel Prize winners in the category Physiology or Medicine have not been created yet.

You can read the first article of the series here.