The Covid pandemic changed modern societies, in which people had long believed to be able to control everything. Health problems were mentally put off and people regarded them as an exclusive problem of the elderly and of distant, developing countries. Health issues were discussed in private and hardly present in public discourses. By now, there is no news program without reports on the current infection rate or vaccination coverage. Some countries reflect this development on their latest numismatic issues, which mainly refer to all the nameless medical helpers or allegorical representations of health care and medicine. 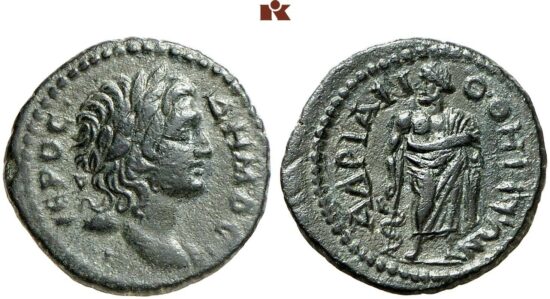 Mysia, Hadrianoutherai. Æ, 3rd century AD. Aesculapius standing on the reverse from the front, looking to the left with staff. From Künker auction 333 (2020), lot 95.

Outside of Judaism, ancient cultures usually believed an entire pantheon of deities to be responsible for the various concerns of the people. Individual health and the possibility of healing sick people were so important for ancient societies that – at the latest in the pantheon of gods in ancient Greek states – there was a division of labour between different goddesses and gods regarding their tasks in the field of health care and medicine. Of the Olympic deities, Apollo (healing in general) and Hera (pregnancy and childbirth) were particularly often invoked for help in medical matters. Even greater importance was attached to the Asclepiads, the family members of Aesculapius, who – according to Homer – was the son of Apollo and a demigod and physician in Thessaly. Besides his wife Epione (goddess of pain relief), this healing family, which was deified after their earthly death, included at least two sons and five daughters. These deities were depicted on Greek coins at the latest since the 5th century BC (Bernhard 1925) – as well as their temples, altars or medical equipment. Both the names of some of these supernatural healers as well as signs and symbols commonly used in connection with them are – still or again – used in European cultures in the context of medical (re)presentations, also in coinage.

Initially, Hygieia was probably an Athenian healing deity in Greek mythology. In the course of the development of the myth, she became the personification of health, the daughter of Aesculapius and eventually the goddess of health. Together with her father and her sister Panacea, who was responsible for medical therapy in the stricter sense, Hygieia was worshipped, among other places, in the Asklepieion of Athens and that of Titane, which are sanctuaries of Aesculapius with attached sanatoria. In most cases, Hygieia was depicted with a snake that drinks from a bowl or a cornucopia full of fruit. Roman provincial coinage of the 2nd and 3rd century also represented the goddess of health with these attributes – sometimes together with Aesculapius. (Numerous of these issues can be viewed in the Kölner Münzportal of the Institute of Ancient History of the University of Cologne.) People hoped that Hygieia would heal them or give medical advice in the form of dreams while they slept in the temple. To this day, Hygieia is considered the patron of pharmacists. Even the word hygiene in the sense of “serving health” is derived from her field of activities (according to German wikipedia: Hygieia, as consulted in March 2021). Later in the Roman Empire, Hygieia coins seem to have been minted in the eastern provinces whenever they suffered from epidemics. 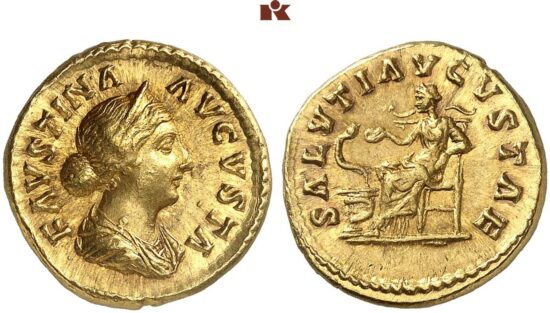 Roman Imperial period. Antoninus II Marcus Aurelius, for Faustina filia. Aureus, Rome. Dra-ped bust to the right with diadem / Salus sits to the left with a patera and feeds a snake wrap-ped around an altar. From Künker auction 341 (2020), lot 5958.

With the expansion of Hellenism from about the 2nd century BC, the cult of Asclepius and Hygieia migrated to Italy and the Roman Empire. There, people already had a deity that was responsible for well-being in a broader sense: Salus. She was responsible for welfare, well-being, salvation, safety and health. In contrast to Hygieia, her work was not limited to the individuals who invoked her but was also applied to society as a whole, i.e. to the state, its citizens and the official representative of the empire. In her original function as seed goddess, she had features of the great fertility goddesses of the Mediterranean and was usually depicted on a throne with sceptre, bowl, snake or ears of grain. Overall, she was considered the patron goddess of the Roman state. At the time of the Roman Empire, the competences of Hygieia and Salus increasingly blended in with each other. Accordingly, locally used depiction of Hygieia-Salus can be interpreted as a wish for the welfare of the province as part of the empire (according to German wikipedia: Salus, as consulted in March 2021).

Personifications of Health Care and Medicine in Modern Coinage

The ancient goddesses of medicine have not been forgotten. Coins with goddesses or female personifications of medicine appear every now and then. The current pandemic, however, has resulted in a proper invocation ritual: since last year, we have been seeing a vast amount of issues of private mints that have found a new theme with the traditional goddesses of medicine.

> Egypt, 10 milliemes, 5 piastres and 1 gunayh, 1979 (Isis suckling her son Horus; Isis was the motherly goddess of birth, rebirth, recovery, protection, magic and at the same time goddess of the dead; occasion: campaign of the Food and Agriculture Organization of the United Nations FAO Food and Health)

> Niue, 1 dollar, 2016 (topic: Angle of Health; in case it is a boy: depiction of the ancient god of love; otherwise: reminder of sexless beauty, youthfulness, lightness, joy)

> Ghana, 5 cedis, 2021 (series: Goddesses of Health, Živa – Slavic Goddess of vitality, fertility, sowing and harvest, holds an apple as a symbol of love in her hand)

> Ghana, 5 cedis, 2021 (series: Goddesses of Health Eir – Norse goddess of healing and medicine from the house of the Æsir)

> Ghana, 4 cedis, 2021 (series: Goddesses of Health, Ixchel / Ix Chel – Mayan moon and fertility goddess, doctor, earth goddess, patroness of water, of the rainbow and of pregnant women, inventor of weaving, with rabbit as ‘face’ of the moon)

> Ghana, 5 cedis, 2021 (Serie: Goddesses of Health, Brigid – Celtic goddess of fertility and maternity, whose name refers to the sacred fire she guarded, patroness of cattle and harvest, mediator of the healing power of plants and water)

> Ghana, 10 cedis, 2021 (Hygieia, Greek goddess of health, healing and medicine, feeds snake, surrounded by birds as a symbol for freedom and eternal life)

With a mintage of only 500 specimens and an unusually high weight of 50 grams, the silver coins of the Goddess of Health series – and all other 2020/21 issues from Ghana – can hardly be considered “actual” money. They are rather medals with a face value, which were advertised as a special and prestigious gift for pharmacists and physicians when the issuing mint launched the series. The symbols of the healers (with halos), which these professional groups still use, are explained to in detail in the accompanying text.

In any case, it can be stated that worrying times need their own forms so that people have an interlocutor, someone to talk to, someone in charge, a bearer of hope or a partner – possibly also an opponent. For religious people this someone is God – in whatever form or abstraction. Others may turn to values or norms, ideals of life, symbols or living persons. Currently, images of modern coinage seem to meet a desire for objectification in uncertain times.