The price of a coin does not only depend on its rarity and its overall quality. There are many things that may affect its value in a positive or negative way. This overview is intended to help you spot common features, to understand what certain terms in auction catalogues mean and to assess whether an offer is a good one or not.

1. Prior to the Minting Process: Planchets

Let’s start with the features that have to do with the piece of metal used to mint the coins. This piece is called planchet or blank.

A coin is described as having a planchet error when there are imperfections or damage that occurred before the coin was struck, namely during the production of the planchet. These include bumps, nicks and impurities of the metal. Planchet errors have a negative effect on the price. However, regarding contemporary, machine-made coins with such defects, planchet errors can cause a coin to increase in value. 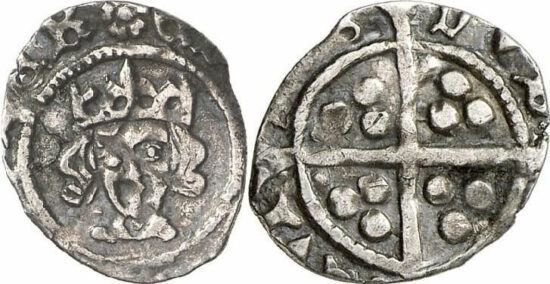 Sometimes, auction catalogues indicate that a coin has a large or a small flan. Flan is just another word for planchet – i.e. for the metal disc that becomes a coin during the minting process. Coins with a small flan are smaller than the dies used to mint them – which means that parts of the image will be missing. Coins with a large flan, on the other hand, provide more than enough space for the entire design. Usually, large flans increase the value of a coin, whereas small flans tend to decrease the price.

An example for an overstrike: Crete, Phalasarna: hemi drachm, 280/270 BC, from Künker auction 136 (2008), lot 311. In this case, numismatists were even able to determine the original coin used for the overstrike: a tetrobol of Argos. Do you see the remains of the capital A on the head of Artemis?

Collectors mainly get in contact with overstrikes in the field of ancient and medieval coins. Back then, it could happen that an old coin was used instead of a fresh new planchet. After all, new planchets weren’t always available. Overstruck coins were produced especially often by auxiliary and military mints. By doing so, it was possible to create coins with new images without great efforts or costs. In many cases, the original, overstruck coin image can still be recognized. Such overstrikes aren’t considered to reduce the coin’s value, they may even be of such high historical interest that they lead to an increase in value.

Three men and five pairs of eyes: the double-strike of this specimen of a Saxon reichtstaler minted in 1596 in Dresden can easily be recognized. From Künker auction eLive 31 (2014), Lot 1208.

For thousands of years, coins were minted by hitting a die with a hammer onto a planchet, and underneath the planchet there was another die. In case the first strike wasn’t strong enough, the motif could not be clearly seen and a second strike was needed. Regarding many coins, several strikes were planned to be carried out in the first place. If the planchet or a die moved a little between two strikes, you could see it on the coin. The motif is slightly doubled, resembling a shadow. This is called a double-strike. Double-strikes that clearly affect the image reduce the specimen’s price.

The result of a die that is not placed exactly onto the planchet is an off-centred coin. One part of the planchet remains empty, which is why part of the image from the die is missing. Since slight and medium off-centre coins were rather the rule than the exception in the age of pre-machine minting, the term “fully centred” is sometimes found in auction catalogues to express that the die was very centred in this case, which has a positive effect on the price. Regarding machine-made coins of the modern age, it’s extremely rare for a severely off-centred coin to enter circulation, which is why it’s considered an error coin that usually realizes higher prices.

We speak of weak strikes when the minting process was not carried out properly, resulting in an impaired image on the coin. This includes cases where not enough force was applied – be it by machines or humans – and the image was only transferred poorly or incompletely onto the coin. A weak strike can also be caused by the dies: if the relief is too high, it can happen that there is simply not enough metal to fill both dies. 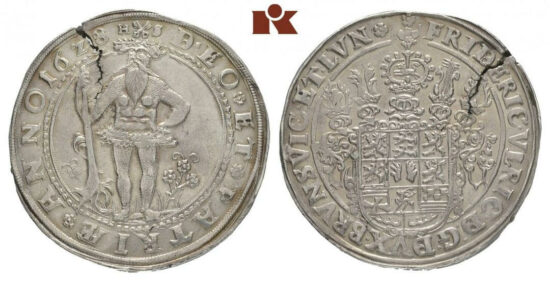 This reichstaler, minted in 1628 in the principality of Brunswick-Wolfenbüttel, has an planchet crack that is clearly visible on both sides of the coin. From Künker auction eLive 28 (2015), Lot 785.

If a planchet is not heated properly in the production process, it can become brittle and crack in one or more places during the minting process. This is called an planchet crack. They can often be seen on both sides of the coin. Planchet cracks decrease the value of a specimen.

Dies can also have cracks or chips due to manufacturing defects or wear. The damaged spots will then be visible on the coins. Frequently, several specimens of one coin type with the same error are known of. Unlike planchet cracks, die cracks can only be seen on one side of the coin. Die cracks also reduce the value of a coin.

A continuation of this article will be published soon. It will deal with wear and tear, cleaning and consequences of environmental processes.

Find out more about the quality of numismatic specimens and coin grades in this article.

In case you’ve always wanted to know what the difference between a coin, a commemorative coin and a medal is: here you’ll find the answer.