Of Sheep and Antiquities: The Coin Designs of Cyprus

There are some countries whose history is a burden that must be painstakingly worked through. Just think of Germany and National Socialism, or Poland and the events of the Second World War. Germany and Poland frequently address their recent history in their coin designs, thereby including numismatics in the difficult process of coming to terms with the past.

In other nations, however, recent history is downright hushed up in favour of more positive phases that happened long ago. An excellent example of this is Greece, where the Greek Civil War – with its victims and victors – is ignored, and not just in the country’s numismatics. This is also the case in Cyprus. With the exception of a few harmless wildlife motifs, the circulating coins of this country – or rather, the half of this divided country that is a member of the EU – mainly refer to Cyprus’ great period, namely the late Neolithic period and the subsequent Bronze Age. During this time, humanity, starting from the Fertile Crescent between the Euphrates and the Tigris, learned how to grow crops, tame animals, make pottery and work metal to fashion tools and weapons.

Nowadays, the events of the Neolithic period are referred to as the ‘Neolithic Revolution’, although of course, this ‘revolution’ happened over a very long period of time and not in every region at once. However, the most important result was that, by the end of it all, these new techniques enabled people to establish settlements. 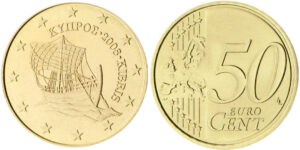 Even before the Neolithic Revolution, people in the prehistoric world were exchanging goods. Exactly how this happened, well, that is a matter disputed among researchers. There probably weren’t any merchants travelling across the land. Instead, clans carried certain objects along with them on their migrations and gave them away as valuable prestige items when they came across other clans. In this way, valuable stone blades, special conch shells or skilfully crafted axes travelled far and wide from clan to clan. 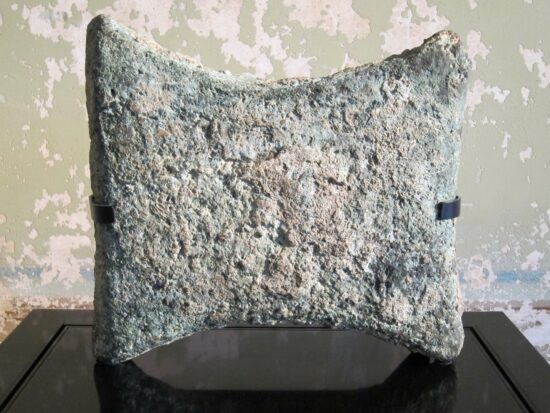 Keftiu ingots, 2nd century BC. Berlin Altes Museum Inv. no. MK 681/11913. The standardised oxhide-shaped ingots, in which form the copper was transported out of Cyprus, weigh 25.67 kilos. Photo: UK.

This would change when the first clans started to establish settlements. They still needed products that had been made in other areas. Now, adventurous merchants took it upon themselves to bring these goods to the clans for a good profit. Cyprus therefore emerged as a hub of trade. This is where copper was produced, a valuable raw material at the end of the Neolithic period and in the Bronze Age. The fact that Cyprus became rich and developed into a transregional hub through copper is clear to see.

Most of the island’s circulating coins allude to this great past, not only after the introduction of the euro, but also before. 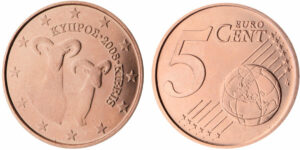 Since 1 January 2008, two sheep have featured on the national side of Cyprus’ low-denomination coins. A sheep doesn’t seem like the best motif to strengthen national identity. And yet, these animals feature alongside an idol from the 3rd millennium BC, which represents the country’s heyday as a supplier of copper, as well as an ancient trading ship as a symbol for Cyprus’ position as a bridge between the east and west. At some point between 8200 and 6800/6500 BC, humans domesticated animals for the first time. These animals included the ancestors of modern sheep, which at the time were not reared for their wool, but rather for their meat. And, sometime in this same epoch, people from Mesopotamia will have crossed over to Cyprus. They brought their knowledge with them and so the findings of the Neolithic Revolution spread throughout Cyprus. Cyprus was therefore the first outpost of this cultural development in Europe.

Cyprus is still home to wild mouflons (ovis orientalis ophion), which are believed to be direct descendants of the first sheep imported from the east. With this coin design, Cyprus therefore presents itself as one of the key connecting stops on the path of civilisation from east to west.

Archaeologists have identified a huge surge in civilisation all over Cyprus at the beginning of the Late Bronze Age. The population grew rapidly, fortifications were built across the entire island and writing was adopted. The wealth for all this had come from copper, which was carried across the entire Mediterranean on ships. But Cyprus also made agricultural products, which were transported in ceramic vessels. Cypriot vessels have been discovered in Egypt and the Levante, but also in Sicily and Sardinia.

From the changes in both the painting of pottery and burial customs, archaeologists are also inclined to conclude that Greeks from Mycenae conquered the island in the Late Bronze Age.

Before the introduction of the euro, Cypriot coins featured ceramic motifs such as this stylised bird. Photo: Помор 2000 / CC BY-SA 4.0.

It therefore wasn’t such a crazy idea for Cyprus to adorn its circulating coins with motifs of the splendid vessels, which were also perfect for converting into coin designs. No less than three denominations of the 1983 circulation series depict ceramic motifs: the 1, 2 and 10 cent pieces.

Cyprus, which certainly has some potentially controversial issues to deal with in its very recent history, what with the divide between north and south, likes to allude to the distant past on its coins. It is impressive how, even today, some countries use history and archaeology to construct the national identity preferred by the state.