The French Marianne I: Marianne as a Representative of the French People – Part 2

Here you can find the first part of this article. It deals with depictions of Marianne on French coins that were issued before the end of the 3rd Republic.

Coinage of the 4th Republic

After years of World War II and a period in which an interim government issued coins with rather limited designs, Marianne also got her place on the coinage of the Fourth Republic (1947 to 1958). Pieces of lower denomination show her with a cockade on the laurel wreath and without the Phrygian cap. The 100-franc piece features her with Minerva’s torch of wisdom and with a cockade on the Phrygian cap. These coins are the first to depict her with the cockade of the Revolutionaries – the colours were originally intended to show that the power of the king (white in the middle) was limited by the people (blue and red, from the Paris coat of arms).

Coinage of the 5th Republic

The 5th Republic was proclaimed by Charles de Gaulle in 1958 and – numismatically speaking – started with a monetary reform. The old franc was still worth a hundredth of the new currency, and new coins came into circulation over the years. Until the franc was replaced by the common European currency – the euro – Marianne mostly adorned centime pieces, usually with the Phrygian cap. Other republican characteristics are referred to by an ear of corn and a laurel branch on the reverse.

Thus, the personification of Marianne was put on the same level as the personification of Liberty. This also applies to the issues commemorating the 200-year anniversary of the French Republic (1992) and the coins celebrating French monetary history that were produced as a farewell to the franc (2000). In the meantime – for example for the XII Mediterranean Games – a very modernised image of Liberty, alias Marianne, with short, windswept hair was featured on coins. 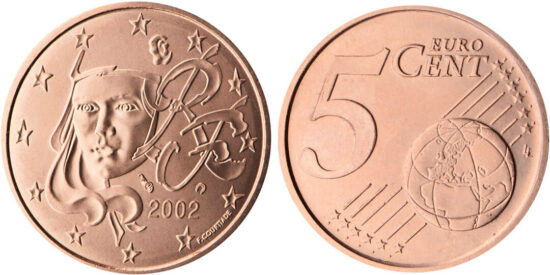 With the introduction of the Euro, Marianne got a place on the circulation coins that most European citizens carry in their wallet. The Euro-Informationen agency comments: Fabienne Courtiade, engraver at the Monnaie de Paris, created the image of a “young and feminine” Marianne “with energetic features who embodies the desire for a strong and enduring Europe” that is depicted on coins of 1, 2 and 5 cents. However, she is only depicted with the attributes of republican liberty – the Phrygian cap with cockade! 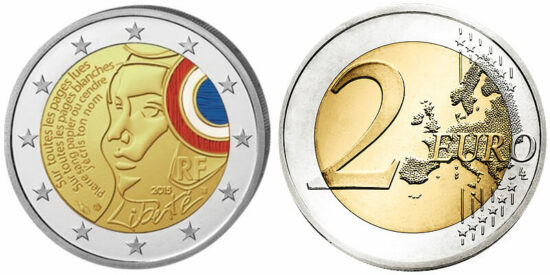 Moreover, a 2-euro coin with another portrait of Liberty – or, according to the description of the issuing Monnaie de Paris, of Marianne – was issued in 2015 celebrating the 225th anniversary of the festival of the federation (French: Fête de la Fédération): this popular festival was held on the Field of Mars (Champ de Mars) in Paris on 14 July 1790 on the first anniversary of the Storming of the Bastille as a celebration of reconciliation and unity among all citizens of France. 60,000 delegates from 83 departments gathered for the festivities. On this occasion, Louis XVI of France was sworn in on the constitution – he was deposed in 1792 after he tried to escape and was beheaded by guillotine in 1793. In 1880, 14 July was declared a national holiday – Bastille Day celebrating unity and the republic. The motif of the 2-euro coin depicts Marianne’s profile with Phrygian cap and a cockade in the colours of the tricolour flag (from the centre to the edge: blue, white, red; represented according to the heraldic rules of tincture by means of hatching). On the left is a stanza from the 1942 poem “Liberté” by the French poet Paul Éluard: “On my notebooks / On my desk and the trees / On the sand, on the snow / I write your name”. It also reads “Liberté” at the bottom of the coin next to the mint mark of coin designer Joaquin Jimenez (Euro-Informationen 2015).

Marianne was hardly ever featured on the manifold French commemorative coins. Moreover, her image increasingly merged with that of the sower. Although the latter also wears the Phrygian cap as a symbol of liberty and independence, she represents the state that provides for its citizens much clearer than 19th/20th-century Marianne. In an eight-part series of 2008, a European Marianne sows stars at all times of the day, which can be read from the respective position of the sun, thus distinguishing itself from the original 1897 sower by this reference to the European community.

In recent decades, the image of Marianne has changed as quickly on coins as it has on stamps, where her image changes with every president. This can also be witnessed in town halls, for which France’s 36,000 mayors choose a new bust every few years. Since 1999, a picture of Marianne has also appeared on all official documents of the French administration. Thus, Marianne is a cult figure in many places in France, and the contents of the allegory are constantly adapting to social developments. Except for a three-part 20-euro series celebrating the Republic’s values that has been issued since 2017, her vanishing presence on the French euro commemorative coins of the past years – which often feature Europe or the sower – can also mean that the former concept of Marianne that emphasised the idea of a nation-state has lost importance in a common euro area. 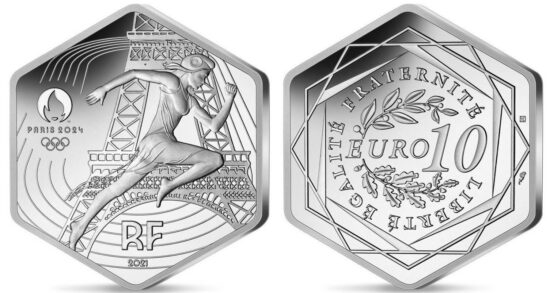 On the 2021 issue for the announcement of the 2024 Summer Olympics in Paris, Marianne presents herself again to the world, and she does so in a very dynamic way: as a runner in front of the Eiffel Tower, identified by a Phrygian cap with cockade. As a representative of the nation, she obviously wants both: represent France’s achievements and rush forward in a modern and combative way into a world that is shaped by the Olympic idea.

The French national allegory Marianne has been present on coins for 125 years. She originates from a time when nationalist revanchism was on the rise, i.e. when political claims for a violent retribution for military and political defeat had grown stronger after the Franco-Prussian War. At the same time, the French state appeared to be weak; the president was not yet as powerful as he is today, and cabinets changed frequently. In this situation, Marianne was invoked as a representative of a people remembering its own revolutionary power. Her image has changed constantly since then. It not only reflects fashions and artistic styles, but has always conveyed political attitudes and statements. Throughout the decades, the concept of Marianne increasingly merged with that of Liberty, the Republic, the state, the nation and the people; which is why the different concepts can hardly be separated anymore today. The imagery is often ambiguous. There is room for interpretation, and contemporary issues as well as other depictions can only tell us so much. Even in the age of the euro, the monetary history of Marianne continues and future developments may result in new coin designs with different ways to interpret them.

The subject of Marianne will also be the topic of our next article. This series will be continued soon, and Marianne will be examined as a symbol of French rule on the money of French colonies and overseas territories.