Born in the Gold Rush – The San Francisco Mint 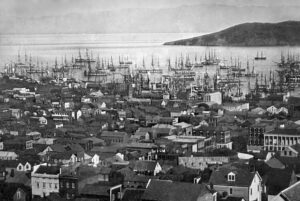 The California Gold Rush caused the population of San Francisco to jump from 900 to 20,000 within one year. This is the harbour of 1851.

On 24 January 1848, the first gold was found in California. The news spread like wildfire and thousands of people headed west to make a fortune as gold miners. Within a short time, the California Gold Rush turned the barely developed hinterland on the Pacific coast into a flourishing region, which became the state of California as early as in 1850. In order to mint huge quantities of coins from all that gold, a local mint was needed, which started business in 1854. And it was high time. In the meantime, a vibrant industry of private mints had emerged that produced their own gold coins, which weren’t official issues but readily used by the population. Among them were the new popular private issues of the company Moffat & Co and the coins of the United States Assay Office of Gold, which were provisional but at least supervised by the government.

The first gold coins from San Francisco weren’t produced by the mint: the octagonal 50 dollar coins of the United States Assay Office of Gold of 1852. From Künker auction 271 (2016), lot 667. Photo: Lübke+Wiedemann, Leonberg.

In the first year of business – 1854 – gold coins worth more than $4 million were minted, and in the years to come this figure increased gradually. Just as today, they featured the mint mark S.

The hastily erected first building soon became too small, which is why a new building was opened as early as in 1874. One year earlier, the mint had already been organised by Congress as a mint in its own right, and was thus no longer a mere branch of the Philadelphia Mint. The magnificent new building reflects this.

Known as Old Mint or Granite Lady, the new building is still beautiful to look at today. Covering ten times the area of the previous mint, the building is still considered a symbol of San Francisco’s prosperity even in times after the gold rush. Soon, gold coins weren’t the only issues to be minted there, from 1878 silver coins like the Morgan Silver Dollars were produced there too. In addition, San Francisco – along with Philadelphia – became the first mint to produce small change from base metal.

Although the building was solid enough to survive the great earthquake of 1906 without any significant damage, the mint moved to a new building in 1937. And it is still located there today. The splendid building is located on kind of a plateau and looks a bit like a fortress – it seems to be at least as solid as the Granite Lady. However, unlike it was the case with the Philadelphia Mint, despite the splendour the new building was also a step backward: with 3,000 square meters, it is only half as big as the Granite Lady, which shows us that the production volume didn’t increase but decrease – the literal golden age was over. In the course of the next few decades, the mint fell victim to cost-cutting measures. From 1955 to 1968, production came to a complete halt, until the US started to produce issues there every now and then. 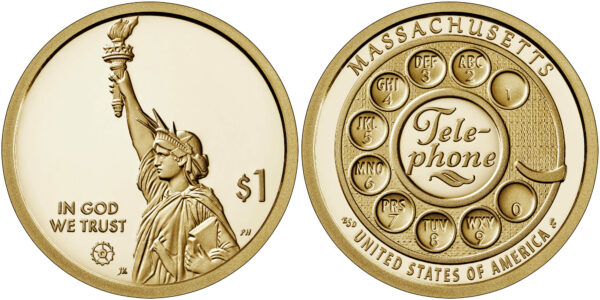 The Proof versions of many commemorative coins are produced exclusively in San Francisco today. An example is this dollar of the American Innovations series of 2020, which celebrates the State of Massachusetts for the invention of the telephone. CoCo US-2020-0021, photo: CoCo / US Mint.

One of the first two colour coins of the United States was minted in 2020 in San Francisco. The curved (!) half dollar honours the Naismith Memorial Basketball Hall of Fame. CoCo US-2020-0030, photo: CoCo / US Mint.

Today, the mint is continuously producing coins, however, no circulation coins are created there. Since 1975, the mint has rather been responsible for sophisticated issues: almost all Proof US coins are produced here. Dies and blanks aren’t manufactured on site but refined and polished.

For example, the Proof version of the current American Innovation series is minted in San Francisco. These coins feature a major invention for every state. Moreover, one of the first two colour coins of the United States was minted in 2020 in San Francisco. 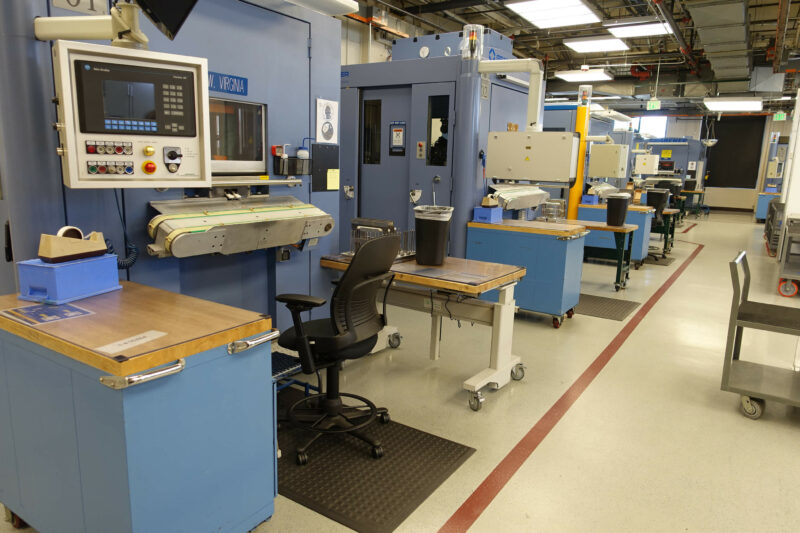 There are 18 Gräbener presses in the minting hall. Photo: UK. 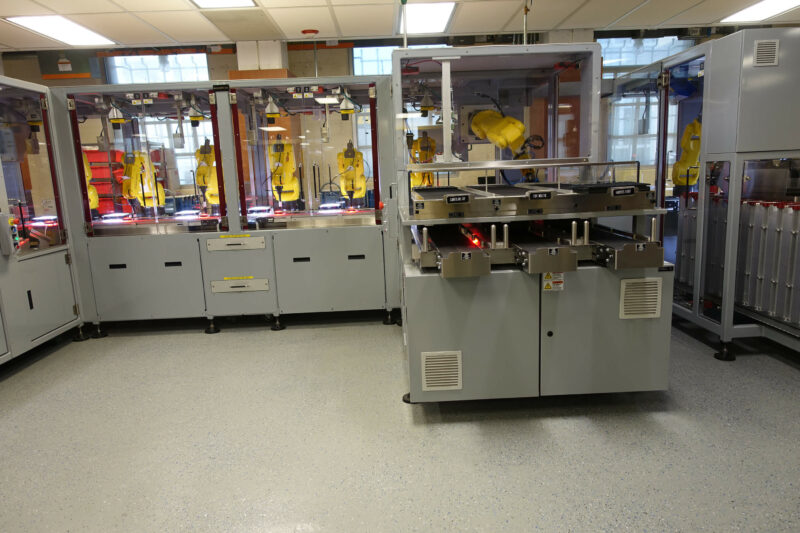 In addition, most coin sets are produced and packaged in San Francisco. That’s why the mint has special machines enabling them to seal and pack thousands of coin sets per day. Since 2016, this task has been performed fully automatically by several robots – no, that doesn’t mean that dozens of little R2D2s and Wall•Es are running around the mint. These robots are high-tech arms that recognize coins, take them off the conveyor belt and put them to the right spot – and they make sure the right side of the coin is up! Since 2016, this automated assembly line has been able to package 1,800 coin sets per hour – previously that figure was 600. The San Francisco Mint is often envied for this state-of-the-art equipment.

Many treasures of US numismatics were created in the long-established mint. Of course, many were made of gold – but not all of them.

One of the extraordinary US coins: the octagonal 50 dollar coin of 1915. Photo: Heritage Auctions.

Among the most unusual coins of US numismatics are the special coins issued on the occasion of the Panama Pacific International Exposition 1915. The event took place 10 years after the devastating earthquake and was a sign that San Francisco had regained its former importance as early as a few years after the catastrophe. Until 2010, the 50 dollar gold coins minted back then were the largest and heaviest official gold coins of the US, and those with the highest denomination. And what’s more: the octagonal version of these pieces is the only official US coin that does not have a round shape.

Since the coins didn’t sell well back then, many of them were melted down, which is why only a few hundred of them exist today and are sold for high prices. 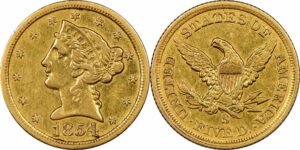 5 dollars 1854. The half eagle is probably the most valuable coin minted by the San Francisco Mint. Photo: NGC.

The most valuable coin minted in San Francisco is probably the 1854-S Half Eagle. With only 268 pieces, the mintage number had already been very low to begin with. Today, only four specimens are known. One of them was sold in August 2018 for 2.16 million dollars. 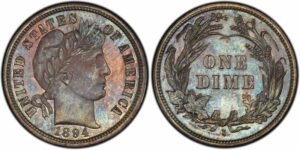 1 dime 1894 from San Francisco, one of only 9 specimens that are known today. Photo: PCGS.

Every coin enthusiast knows that a coin doesn’t have to be large and made of gold to be worth a fortune. Thus, one of the most precious coins of the San Francisco Mint is a 10 cents piece, a dime. It was minted in 1894 and called Barber Dime after its designer. But whereas 1.3 million specimens were minted in Philadelphia in that year, only 24 were produced in San Francisco. It’s not clear why that happened, anyway, whenever one of these rare pieces enters the market today, very high sums are paid for it. In January 2016 one of them was sold for 1.997 million dollars. 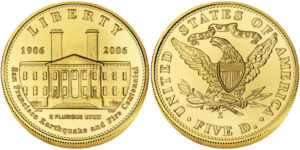 In 2006 a gold commemorative coin of 5 dollars was issued in honour of the large Old Mint. It was minted – of course – in San Francisco. Photo: US Mint.

Today, people fondly remember the days of gold mining and the golden age of San Francisco, which is represented by the magnificent Old Mint. Again and again, efforts are made to turn the Granite Lady into a museum. In 2006, the building was commemorated with an image featured on a commemorative dollar. The coin was obviously minted in San Francisco. And, of course, it is made of gold.

Here you can find our article about the Philadelphia Mint.

On YouTube, you can see the packaging robots in action, and the website of the US Mint explains the tasks of each robot in more detail.