Cleaning, Patina, Verdigris etc.: Which Errors Affect the Price of a Coin? – Part 2

Here you can find the first part of this overview.

Scratches are a very common form of damage on coins. Not being attentive for just a moment can already result in a scratch. Depending on size and position, scratches can significantly reduce the piece’s value. Scratches in the field – as the smooth surface around the motif is called – have milder consequences on the price than scratches on the motif.

An edge chip is a typical indication for the fact that a coin once slipped out of someone’s hands and fell on the ground, which damaged the coin edge. Since edge chips are not always visible in pictures, it’s all the more important to mention them when describing a coin.

If someone deliberately scratches something on a coin, this is called a graffito. This has been done since ancient times. Sometimes they are political messages and can therefore be of historical interest. Usually, however, they are considered deliberate damage and therefore reduce the specimen’s value. 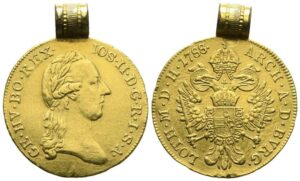 In the past, coins and medals were sometimes attached to a wall, clothing or were worn as a necklace. For this purpose, they were occasionally punched, filed at the edge or eyelets and handles were added. These manipulations reduce their value as they damage the coin itself. Attempts to undo such operations result in coins with plugged holes, traces of mounting and remainders of handles, which also reduce its price.

In the case of Renaissance medals, on the other hand, perforations can increase a specimen’s value since these pieces were often hung on the wall by contemporaries, and a perforation is an indication that the piece is an original and not a later cast.

Not all cleaning processes have a negative effect on the price, although many collectors are afraid of this. On the other hand, it should be noted that they also don’t increase a specimen’s value. The basic rule of thumb is: removing dirt from a coin isn’t a problem, but everything that affects the coin itself and its patina (see next section) is bad and inevitably leads to a significant reduction in price. Therefore, coin collectors are generally very careful today when it comes to cleaning coins.

In the 19th and early 20th centuries, collectors were less gentle: acid cleaning agents and other invasive cleaning methods were used. Tiny cleaning scratches on coins indicate that someone tried to give an old coin its shiny look back. Such coins are referred to as “improperly cleaned” or simply “cleaned” coins. Since it’s no longer possible to verify the authenticity of such a coin, such cleaning operations significantly reduce the price.

1/2 reichstaler, Archbishopric of Salzburg, 1711. The fields of this coin were smoothed. Look at the different toning between the field and the area of the circumscription on the obverse. From Künker auction 117 (2006), lot 6285.

Until the 1970s, it was common practice to use a polishing pen to remove scratches from coins and to “prettify” the fields. Since this method invades the coin itself and removes the patina, it significantly reduces the price. Such pieces are referred to as “smoothed” (or smoothened) in auction catalogues.

If the details or the legend of a coin are in poor condition, people sometimes try to recut these details to make them more recognizable. By doing so, some like to pretend that their coin is of a better grade. Such operations are close to forgeries and severely reduce the piece’s value.

Coins that have been in the ground for a long time experience various chemical reactions, triggered by the substances in the soil around them. This can lead to a variety of different phenomena.

A beautiful green patina, as can be seen on this sestertius of Caligula, drastically increases the specimen’s price. From Künker auction 262 (2015), lot 7927.

The copper contained in bronze coins often creates a so-called patina, a coating on the surface. The patina can have different colours, depending on the composition of the soil, and usually increases the coin’s price – especially if it looks homogeneous. Attractive green and blue colours are particularly valuable. A patina can vary in nature, but is always regarded as proof for a coin’s age. A patina also serves as a natural protective layer against destructive reactions, which is reason enough to refrain from removing it. A patina should not be confused with a toning. 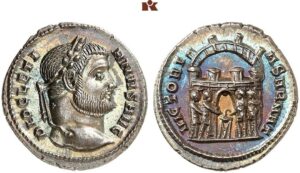 The fine dark layer on silver coins is not called a patina – although this term is used rather often – but a toning. As is well known, silver oxidizes on contact with air. More precisely, silver reacts with hydrogen sulphide in the air and turns into silver sulphide. Regarding coins, however, we do not call such specimens “oxidised” but “toned”. Depending on where a coin is stored, the toning can look very different. A fine toning is highly-coveted among collectors and significantly increases the coin’s value. A toning is considered fine when it’s uniform and dark. Particularly popular is a so-called iridescent toning, which occurs, for example, when coins are stored for a long time in old oak cabinets.

Attention: Since coins with a beautiful toning or patina are highly sought after, many attempts are made today to artificially create a similar effect with the help of chemical treatment. To recognize the difference between an old, grown layer and the result of a modern chemical treatment requires a lot of experience.

It may happen that the silver of silver coins combines with other elements in the ground, creating a crust of silver chlorite on the coin. In numismatics, this is called horn silver. This crust is very difficult to remove without damaging the coin. Since it isn’t dangerous, it is often not removed. 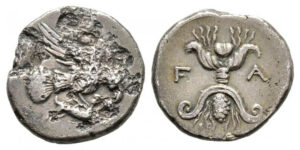 Coins in particularly acid or polluted soils corrode heavily. This results in so-called pitting corrosion, which means that an increasing amount of holes appears in the surface and destroys it. This type of corrosion occurs particularly often in fertilized soils.

The term craquelure describes a fine, spider web like pattern of cracks that often occurs on ceramics and the varnish of oil paintings. Rarely, it’s also found on coins, especially on pieces from northern Greece. 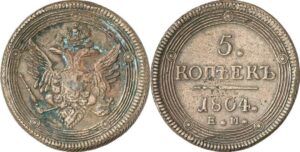 The worst phenomena that can result from reactions of coins and the soil are verdigris and bronze disease. These terms describe highly destructive types of corrosion that occur in copper coins and silver coins which contain a lot of copper. The result is toxic copper acetate, which eats its way through the coin. The crystallization of pieces that lie untreated in a collection can infect other coins. Professional treatment is the only way to save these coins. Their value is reduced drastically.

Attention: In case of prolonged contact, these toxic crystallizations are also dangerous for humans!

Here you can find the first part of this overview.