Whenever large gold finds were discovered in the history of the USA, it did not take long for a so-called Assay Office to be established. These institutions were supposed to check whether the precious metals were lawfully utilized. When things went well, these institutions were turned into branches of the big mint in Philadelphia. That is what happened in San Francisco during the great California Gold Rush. And at the now closed mints in Charlotte and Dahlonega. And it is also what happened in Denver.

In 1858, gold was found in today’s Colorado. One of the numerous gold fevers of the 19th century attracted many gold prospectors to the small mining town of Denver, which quickly developed into a thriving city.

By 1863, a state gold assay office had opened in Denver to replace all the private mints. From then on the state assay office tested all gold and made gold bars from it. However, and contrary to what had originally been authorized by Congress, no gold coins were produced. It was not until 1895 that it was decided to establish a proper mint. However, it took until 1906 for the mint to finally open. The reason for this delay was that the ultra-modern minting system was presented to the public at the 1904 World’s Fair in St. Louis.

Denver Today: Circulation Coins for All Western States of the US

It is surprising that the mint is still located in its very first building today, even though the complex has been expanded occasionally, for example in 1936 and 2000. And yet, in terms of production capacity, Denver can certainly compete with the massive new building of the Philadelphia Mint. Although the building looks somewhat venerable, the interior of the mint was obviously completely modernised. After all, the Denver Mint is now a large-scale producer with about 400 employees and more than 40 Schuler presses. Besides Philadelphia, it is the only US mint that produces circulation coins. Denver essentially supplies the western half of the US with circulation coins, and Philadelphia takes care of the east. Since 1996, Denver has been making its own dies, before that they were made in Philadelphia.

Every now and then you can read that Denver has the capacity to produce even larger volumes than the great Philadelphia Mint: up to 40 million coins per day they say. It’s a fact that in some years, Philadelphia produces more coins than Denver, and in others it is the other way around. There is one production record Denver set for sure: in 2000, 15.4 billion coins were produced there – definitely a record in the US. Perhaps even a world record?

This is expected to be the only coin produced exclusively in Denver in 2021: the circulation half dollar honouring the National Law Enforcement Museum and Memorial. Photo: US Mint.

Products of the Denver Mint

Coins minted in Denver have featured the mint mark D since 1906. Do you have a US coin minted before 1906 that features the mint mark D? That’s because – before D became the mint mark of Denver – this letter was used by another mint that no longer exists today: Dahlonega in Georgia, where coins were minted between 1838 and 1861.

There are not as much rare coins from Denver than there are from San Francisco or Philadelphia. However, some treasures can be found in circulation money. In 1992, for example, Denver produced pennies on which the A and the M of “America” on the reverse were closer together than they were supposed to be. To this day, 15 of these mint error coins were found. They realized prices of more than 20,000 dollars!

There are also particularly valuable Saint Gaudens Double Eagles from Denver. In 1927, about 3 million double eagles were minted in Philadelphia and San Francisco each. However, only 180,000 specimen were created in Denver. And only 7 of them are known today – which makes them extremely valuable. Such a piece realized more than 2 million dollars at an auction sale in January 2020. According to Heritage, it is the rarest US coin of the 20th century with a regular mintage. It is probably also the most expensive coin minted in Denver. 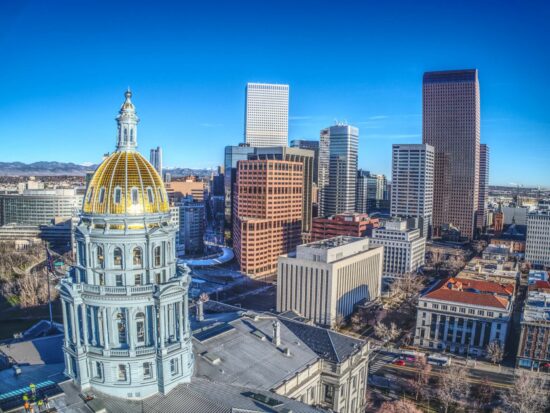 US commemorative coins are usually produced by several mints at the same time. Thus, coins of the popular US series – America the Beautiful quarters, Presidential dollars and American Innovation dollars – were minted in Denver too. However, it rarely happens for a design to be minted exclusively by the Denver Mint, but there is one exception: this year’s series honouring the National Law Enforcement  Museum in Washington features different motifs depending on the mint. The circulation half dollar depicting a sheriff’s star on one side and a magnifying glass with a fingerprint on the other will probably be the only 2021 coin exclusively minted in Denver.

The mint is one of the most popular tourist attractions in the capital of Colorado. To a certain extent, it is part of the city’s identity. And that is no surprise given that its history is also the history of the city and the entire state. The mint has been there from the very beginning. And who knows if Denver would be the big city it is today had someone decided to establish the assay office in another mining town…

Here you can find our articles on the Philadelphia Mint and the San Francisco Mint.