The French Marianne II: Marianne as a Symbol of French Rule – Part 1

The concept of the modern nation originates with the European bourgeoisie, although the intensity of our attachment to a specific nation – i.e. the feeling of national identity – does not depend on social classes, strata or milieus. In the 19th century, the idea of the nation assumed that there was a “social totality” that included the aristocracy, which had been dismissed from political rule, as well as the newly emerging working class. This concept of social totality merged with the principles of popular sovereignty and self-determination, as emphasized during the French Revolution, to form the concept of a nation-state. Accordingly, the state was no longer the result of territorial politics but was exclusively determined by the nation organised within the specific state. Although this principle isn’t part of international law, it has been used as a political postulate since the early 19th century and as a justification to found new states up to the present day.

Nation-state thinking, which was establishing itself in European countries, met with rapidly accelerating economic growth as a result of the industrialisation and with a colonialism that was no longer exclusively aimed at the territorial expansion of one’s political sphere but had the main objective of exchanging goods and cultures. “According to estimates, the value of world trade increased fiftyfold between 1790 and 1913” (Nogarède 2014). In this context, industrial progress went hand in hand with controlling and exploiting any resource available – be it mineral deposits or human beings. The guiding principles of the French Revolution “Liberté, Egalité, Fraternité” ultimately applied only to very few citizens that lived in the emerging nation-state – but not to women, children or colonies.

Which of these developments, which culture, which values are expressed by French coinage issued for colonial territories? And what is the role of the French national allegory Marianne, whose image has adorned numerous coins in France since 1897, symbolising the strength of the people and national unity? 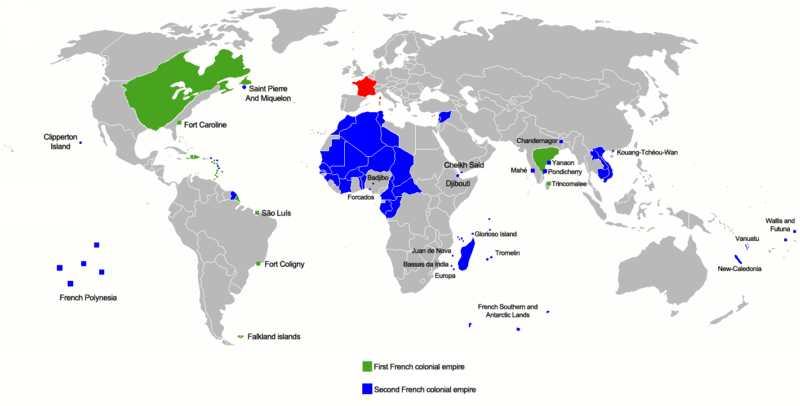 France built up an overseas colonial empire twice. The first one included large parts of North America and was mostly lost in the Seven Years’ War (1756 to 1763). The second one, located in Africa, was the second largest in the world in the 19th and early 20th centuries.

After the end of the First Republic, the Restoration brought the Bourbons back to the throne, who set about rebuilding the lost colonial empire. In the July Revolution of 1830, Charles X was overthrown and replaced by the “bourgeois monarch” Louis Philippe I. Another bourgeois revolution gave France the Second Republic in 1848.

Louis Napoléon Bonaparte was elected President of the Second Republic, but had himself crowned Emperor Napoléon III as early as in 1852. Under his rule, opposition at home was violently suppressed; regarding foreign politics, his government distinguished itself by acquiring Nice and Savoy, building the Suez Canal as well as incorporating Equatorial Africa and Indochina into the growing colonial empire.

Marianne for Colonies on the African Continent

After the Franco-Prussian War, as a result of which Napoléon III was forced to abdicate, the French colonial empire covered an area of 7.7 million square kilometres during the Third Republic (1871 to 1940). In Africa, competition arose between France and the United Kingdom. Their competing conquests of foreign territories escalated into the Faschoda Crisis of 1898: the United Kingdom wanted to conquer a north-south belt of colonies in Africa, from the Cape of Good Hope to Kairo (the Cape to Cairo Railway) – France, on the other hand, wanted to establish an east-west belt from Dakar to Djibouti. The claims of both countries weren’t compatible, and France ultimately gave in without a fight. The two states defined the borders of their territories in the Niger Treaty in March of 1899 (German Wikipedia: Frankreich, adapted from Baumgart 1974).

The Algerian War from 1954 to 1962, at the end of which Algeria was released into independence, marked a fundamental shift in French colonial history about half a century later, and its repercussions are still visible today. In the countries south of the Sahara, the Central African currency of the CFA franc zone (Franc de la Coopération Financière en Afrique) is a daily reminder of the former colonial power.

In African communities, various non-coinage means of payment had traditionally been in use until well into the 20th century – gold dust, pearls, bars of salt, shell money, manillas (horseshoe-shaped bronze objects), Katanga Crosses, Kilindi rods etc. Coinage in the European sense of the words was known in trade centres, for example in the form of the Maria Theresa taler, but was hardly used within the country. Marianne as a representative of the French nation state therefore appeared rather late on coins issued for French colonies. She is depicted with all the insignia of the state that was founded as a result of the French Revolution: the Phrygian cap of liberty, the republican cockade, the laurel wreath as a symbol for the glorious history of the self-determining people or the oak leaf wreath representing the persistence and strength of the republic. However, since these statements did not apply at all to African communities in colonial times, the coin images seem to mock the living conditions of the Africans who had to use the money that had been imposed on them under the guise of modernization and cultivation. Adopting the image of Liberty or rather Marianne on the coins of French colonies thus runs counter to the fact that regional self-determination and popular sovereignty – as proclaimed as a matter of course in France since the Revolution – were not in the cards for the occupied countries.

This article will be continued in a second part. Here (part 1) and here (part 2) you can find Gabriele Sturm’s articles about Marianne on French coins.